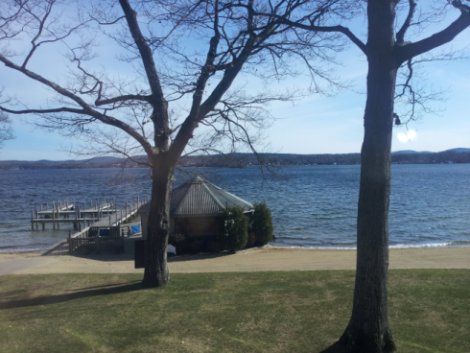 The view from my room at the Christian Home Educators of New Hampshire Convention.

On Friday and Saturday, I spoke at the Christian Home Educators of New Hampshire convention. It was held at a very nice resort in the town of Laconia, New Hampshire. The resort was right on a lake, so the views were beautiful. Indeed, my Saturday talks were held in a large room that had huge windows and a great view of the lake. I expect people were enjoying the view more than my talks! Even so, there were some great questions, and because it was a smaller convention, I got to spend a lot more time talking to people one-on-one.

The conference started on an incredibly memorable note. I was sitting at a table in the vendor hall waiting for my first talk to begin, and a young woman who was in her 20’s came up to me and asked if I was Dr. Wile. When I told her that I was, she introduced herself, giving me her married name and her maiden name. I seemed to recognize the maiden name, but I couldn’t place it. Then she told me her story. Back when I owned a publishing company, I used to have a “Science Question of the Week” competition on the company’s website. I would post what I thought was a challenging science question, and I would invite students 18 or younger to answer the question. After 12 questions, whoever had the most correct answers got to choose from a list of four prizes, typically bought from the Edmund Scientifics catalog.

This young lady told me that she was a past winner of the contest. That, of course, told me why I recognized her maiden name. She said that she chose a Galileo thermometer as her prize and had treasured it for many years. Well, not too long ago, she was cleaning the shelf where it was stored and broke it. Even though she is now an adult with young children of her own, she actually sat down and cried over the loss! Her grief must have been evident, because her husband ended up buying another one to replace it.

Her story meant a lot to me. I thoroughly enjoyed my time working on the Science Question of the Week, but I had no idea that it meant so much to (at least some of) the students who participated in it. It just goes to show that when you work with students, you never know how you will touch them. Never in a million years would I have thought that the contest meant so much to a student that even as an adult, she would be emotionally affected by the loss of a $30 prize. Teachers and homeschooling parents, take this as a lesson. The things you do that you think are small and insignificant might affect your students in an incredibly powerful way!

I want to say something else about the Science Question of the Week contest before I move on. My interactions with home-educated students in this contest almost always impressed me. I had to post some really tough questions in order to make sure there wasn’t a big tie for first place. Often, the questions centered around mind-bending topics like general relativity, quantum mechanics, and genetics. Nevertheless, I posted very few questions that stumped everyone. I was constantly amazed how many of these home-educated students could answer questions that a lot of students in my university-level chemistry and physics courses would have been unable to answer.

Also, the honesty of many of the students impressed me. There was a prize involved, but I can’t tell you the number of students who asked if they were allowed to look up the answers to the questions or if they had to do it from memory. Of course, I told them that they could use any resource at their disposal (except posting the question in a forum) to get the answer. However, I got the distinct impression that despite the fact there would be no way I could enforce the rule, most of the students would not have tried to look up the answer if I had told them that they couldn’t!

The exchange between me and the contest winner happened at the beginning of the conference, and it set the mood. The conference was incredibly interactive, and the attendees were not the only ones who learned something. For example, one of my talks is entitled “The Creatures and Biological Structures Evolutionists Don’t Talk About.” Essentially, it goes through some of the amazing designs we see in God’s creation. Most of the designs I highlight are things that human science and technology cannot come close to matching. Such designs strongly attest to the design ingenuity of the Creator, so most students won’t learn about them unless they find out on their own. During that talk, I discuss depth perception. The best depth perception occurs when an organism has eyes that are close together, but no too close together. Essentially, each eye receives a slightly different image of everything you see, and your brain compares those images to determine how far away objects are.

In the question/answer session, one of the attendees pointed out that if you cover one of your eyes, you can still judge how far away things are. I told him that the brain actually uses three means by which to judge depth, and the two-eye method is the most accurate by far, especially for nearby objects. I told him that if he wore an eye patch over one eye for quite some time, he would notice a marked decrease in his ability to judge depth.

Well, after the talk was over, a mother came up and told me that her daughter had Crouzon Syndrome. One of the symptoms of this genetically-inherited disorder is that your eyes are set farther apart from one another than they should be. As a result, you have poor depth perception. It turns out there is a surgical treatment for the disorder, and her daughter had it. In essence, the surgeon breaks many of the bones in the skull and then reforms them to actually move the eyes closer to each other! First, I had no idea that the disorder existed. Second, I had no idea that modern medicine had the ability to actually move a person’s eyes relative to each other. The mother then told me how this all related to the discussion at hand. Since the child was a bit older when the surgery was done, the child could actually notice how her depth perception improved as her brain adjusted to the new positions of her eyes!

10 Responses to The Christian Home Educators of New Hampshire Convention