This post is a bit different from the standard fare you find on my blog, but it is about two of my passions: acting and chemistry. As longtime readers are probably aware, acting is a hobby of mine. I write Christian Dramas, most of which are best characterized as “skits,” and I also act in them. In addition, I do some community theater. Most of it is done at Anderson’s Mainstage Theatre as well as a new local group, The Alley Theatre. However, I have done some shows with other groups. In 2006, for example, I played Maurice (Belle’s Father) in Indianapolis Civic Theatre’s production of Beauty and the Beast. You can see a couple of scenes from the show here and here. The young lady who played Belle is one of the best actresses with whom I have ever worked, and I have worked with a lot of actresses!

In any event, I recently played the role of Abraham Van Helsing in Anderson Mainstage Theatre’s production of Dracula. The script is a relatively new one, but I think it is the best one I have seen. In the scene where Van Helsing confronts Dracula with a crucifix, the script says that Dracula is suppose to touch the crucifix, and it is supposed to briefly catch fire. I asked the director if she wanted that effect, and she said, “Yes, as long as it doesn’t look stupid.” I took that as a challenge.

Based on my past experience in the theater, I know of a substance called “flash cotton,” and based on my knowledge of chemistry, I understand that it mostly consists of a chemical called nitrocellulose. I had learned to make it for another show I was in years and years ago, so rather than buying it, I made it myself. The recipe is really simple, as long as you can get the ingredients.

To make the nitrocellulose, I cooled 50 mL of concentrated sulfuric acid and 50 mL of concentrated nitric acid down to 0 degrees Celsius. Once cooled, I mixed them together and kept the mixture in an ice bath so it would stay at 0 degrees Celsius. I pulled the cotton balls into several pieces and put those pieces in the acid mixture. I used a glass stirring rod (no metal!) to mix the cotton with the acid and let the cotton soak for 4 minutes. I then used two glass stirring rods like chopsticks to remove the cotton and place it in a beaker of water. I stirred the cotton in the water, pulled it out, and put it in another beaker of water. I did that twice more, so that the cotton was washed in water a total of four times. I then put the cotton in a saturated solution of baking soda and water in order to neutralize any acid that had not been washed out of the cotton. Once the cotton stopped bubbling, I knew all the acid had been neutralized. I pulled it out of the solution, let it dry, and the result was nitrocellulose.

Now, the great thing about nitrocellulose is that it ignites easily and burns quickly. Since it burns quickly, you don’t need much of it in order to produce a really nice flame. So now that I had the fuel, the only thing I had to do was make an igniter and put the igniter and fuel into a cross. I used a Dremel tool to cut a depression in the back of the cross near the bottom. That served to hold the battery. I then cut a trough in the back of the crosspiece. That trough served to hold the nitrocellulose. Here’s what that looked like: 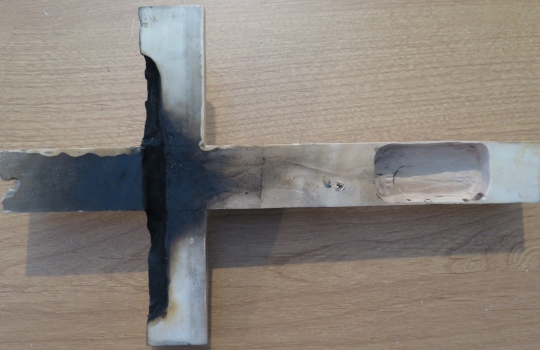 The back of the cross is blackened because I took this picture after doing the effect in four rehearsals and six performances. The cross never caught fire. The black is mostly residue from the nitrocellulose burning.

I attached a cap to a 9-volt battery. The cap had two wires that were stripped at the end. I ran one wire all the way up to the trough. The other wire I cut a few centimeters from the cap, stripped the end, and wound the bare wire into an oval. I then took another wire, stripped both ends, wound the bare wire on one end into an oval, and placed it next to the first wire oval. I then ran the other end of that wire up into the trough.

Probably the most important thing comes next. You need a filament between the wires, and that filament needs to get really hot when electricity flows through it. In the theater, I was taught to use nickel chromium (nichrome) wire. However, it is typically thin and breaks easily, which can make the system unreliable. One of my colleagues at Anderson University suggested using a strand from a stainless steel scouring pad. That proved to be perfect! It got red-hot when electricity was passed through it, but it was also strong, so it didn’t break until after the nitrocellulose was ignited.

I secured everything with masking tape, covering the wires and the battery. Since masking tape looks a bit like wood, this also served to “hide” everything from the audience. Here is what it looked like at this point: 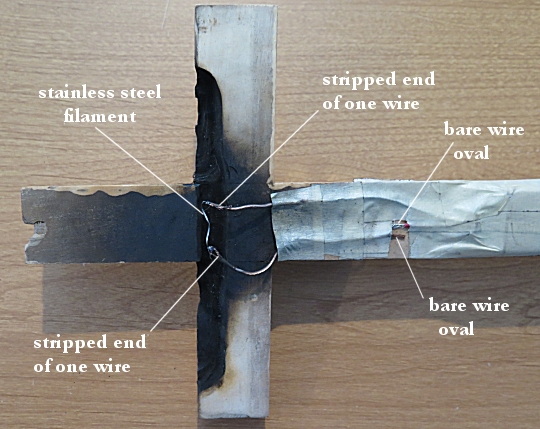 The only thing left was to add the fuel. I covered the filament with nitrocellulose and filled rest of the trough with it. I then put masking tape behind the nitrocellulose to hold it in place. Here is what the back of the cross ended up looking like: 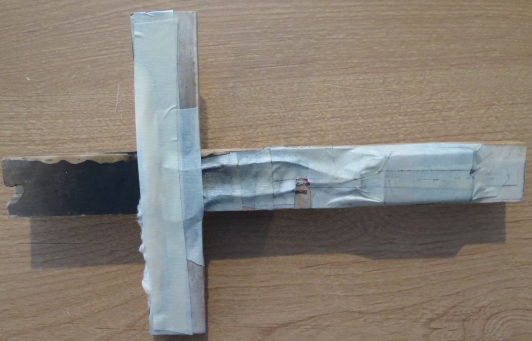 To ignite the fuel, I taped a strip of aluminum foil to my thumb. When Dracula touched the cross, I pushed the foil against the two ovals made of bare wire. That completed the circuit, allowing electricity to heat the filament and ignite the nitrocellulose, producing the effect pictured at the top of this post.

Ignition and the full burn took less than a second, and it never failed.

One thought on “A Chemistry-Based Special Effect for Stage”