A Small Brain Does NOT Mean A Low Intelligence 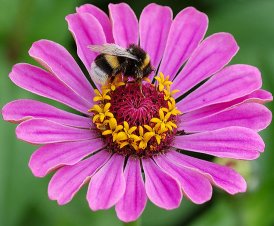 As I mentioned in a previous post, because they are not willing to understand that it has been designed by an incredibly intelligent and powerful Designer, evolutionists are forced to look at nature in a ridiculously simplistic way. Take the naive evolutionary idea that brain size correlates with intelligence. Because evolutionists can’t appreciate the incredible design that went into producing brains, they generally assume that the smaller the brain, the lower the intelligence of the organism. Nearly a year ago, I reviewed The Design of Life , which discusses some powerful evidence against this silly notion. Recent research1 on bumblebees has just added more evidence to the pile.

In the research, the investigators wanted to know how a bumblebee decides the order in which it visits flowers. It has been observed for quite a while that bees tend to visit the flowers they have identified as good food sources in a predictable order. In other words, they don’t fly “willy nilly” amongst the flowers they visit. Instead, the have a planned flight route. This has been called trapline foraging, because human trappers typically follow a preplanned route when checking the traps they have set.2

The question the authors wanted to address was how the bees arrive at their preplanned “trapline” route. Do they just visit the flowers in the same order in which the flowers were originally discovered, or is there more thought given to the process? In the end, the researchers were able to show that there is a lot of thought devoted to the process.

In the cleverly-designed experiment, the authors used artificial flowers that gave only a certain amount of artificial nectar. This forced the bees to move from flower to flower rather than just eating their fill at any one of them. They presented the bees with a total of four flowers, and they watched how each bee visited the flowers. First, they put all the flowers together in a patch, and then they progressively moved three of the flowers away, so that in the end, the four flowers were in different locations, each separated by a reasonable distance.

This is perhaps more impressive when we consider that the bees appear to optimize their flight routes despite the presence of both conspicuous landmarks (placed near flowers to facilitate the retrieval of landmark sequences in the entrainment order) and scent marks that should have favored the stabilization of the suboptimal—discovery order—route.

In other words, the researchers tried to get the bees to visit the flowers in the order in which they were discovered. Instead, the bees ignored the cues left by the researchers and deliberately reordered the sequence of flowers so as to make the total distance they had to travel as short as possible.

The authors compare this to the famous “traveling salesman” problem, where a salesman must make several stops, and he tries to plan those stops in as efficient an order as possible. When the number of stops gets very large and their locations are spread out, it often takes a computer days to figure out the correct solution. Some popular sites have taken ahold of that comparison and have said things like:

Bumblebees can find the solution to a complex mathematical problem which keeps computers busy for days.

Such a statement is more hype than science. In the experiment, the bees figured out a optimal strategy for visiting four locations. While that clearly shows the bees are able to solve a complex problem, a four-location-traveling-salesman problem doesn’t take a computer days to solve! So to imply that the bees are as good as or better than a computer at solving such a problem is seriously overstating what the data say.

However, many of those same websites (such as the one linked above) do quote one of the authors, who makes an incredibly important point:

There is a common perception that smaller brains constrain animals to be simple reflex machines. But our work with bees shows advanced cognitive capacities with very limited neuron numbers.

That is very well said, and it flies in the face of the evolution-inspired nonsense that a small brain means a low intelligence. In fact, because of the amazing Creator who designed brains, size probably doesn’t correlate to intelligence in any way. Just as my current laptop computer is significantly better than my current desktop computer, intelligently-designed systems do not lend themselves to a overly-simplistic categorization processes. Small brains can be incredibly intelligent, because they have been designed by a truly incredible Intelligence!

Like Loading...
This entry was posted in Creationism, Evolution, Intelligent Design, The Wonders of Creation. Bookmark the permalink.