Suppose you want to listen to some music. You pull out your iPod or your phone, put the earbuds in your ears, and you start to enjoy your favorite tunes. You probably don’t think about the process that makes this possible: digital-to-analog conversion. Computers and devices based on them store all of their information digitally. On your iPod or phone, the music is stored as a string of 1’s and O’s. The 1’s represent electricity being on, and the 0’s represent electricity being off. So as your iPod or phone “plays” the music, it comes out digitally: as pulses of electricity, either on or off.

If you tried to listen to those pulses, they would make no sense to you, because your ears aren’t designed to hear things digitally. Instead, they are designed to hear sounds in a continuous flow. We call this analog. So while your iPod or phone stores music digitally, it must convert that music into a continuous, analog signal so that you can understand it. It does this with an electrical circuit called a digital-to-analog converter (DAC). Here is a picture of a simple one (click it for credit): 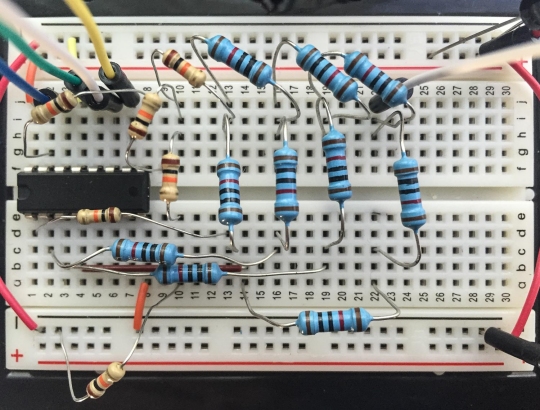 Obviously, the digital-to-analog converter in your phone or iPod is much more sophisticated. It produces a higher-quality analog signal, but probably more importantly, it is packed into a tiny space. That’s what really makes it sophisticated. It can do a complex job while taking up very little room.

It turns out that cells have essentially the same thing, but it is significantly more sophisticated than what you find in an iPod or phone.

Researchers at Harvard Medical School were trying to better understand how cells respond to their environment. As they note, there are many processes that help cells do this, but they concentrated on the process by which a cell knows how often to use the genes in its DNA. When a cell reads a gene, the information on that gene is copied and then sent to protein-making sites in the cell. The process of copying a gene’s information is called transcription. Well, the rate of transcription changes for each gene, depending on the needs of the cell. What determines how the transcription changes? Here’s what the authors say:

Cells must coordinate responses to many stimuli, including signalling cues from other cells, the extracellular matrix, hormones and active compounds. As they are subject to feedback control, these response pathways are usually ‘on’ or ‘off’ in nature. By contrast, transcriptional changes can be ‘dialled’ up or down and provide a composite response to multiple inputs over time. In line with this, signal transmission to chromatin can be compared to a digital-to-analogue converter (DAC) that takes ‘on’ and ‘off’ signals and converts them into a continuous output that can vary in amplitude over time. We speculate that histone tails may function in this way, acting as a site that stores signals and integrates them to regulate the transcriptional programme.

The more I learn about nature, the more in awe I am of the One who created it!

3 thoughts on “Cells Have Digital-to-Analog Converters”