A reader sent me this article and asked for my thoughts on it. It discusses the fact that the ozone “hole” over Antarctica grew 22% from 2014 to 2015. It presents the graph shown above, which demonstrates that despite the fact that the worldwide use of chemicals known to destroy ozone has dropped to nearly zero, the size of the ozone hole has not really decreased. It points out two studies that claim the ozone hole will shrink in size by either 2020 or 2040, and it concludes with this sentence:

But the longer the hole persists, the greater the likelihood that the ozone layer is dominated by natural factors, not human CFC emissions.

So what’s the story? By banning the use of CFCs, which we know can destroy ozone in the ozone layer, did we really fix the ozone “hole” problem? Or did we, as this story seems to imply, try to fix something that is probably the result of earth’s natural variability?

The first thing you need to know is that the ozone “hole” isn’t really a hole. It is a reduction in the amount of ozone that exists within the ozone layer, a portion of earth’s atmosphere that is roughly 15-35 kilometers above the surface of the earth. While all portions of the atmosphere have some ozone in them, this portion has the highest levels. Ozone’s molecular structure allows it to absorb some of the ultraviolet light that comes from the sun. That’s good for us, because ultraviolet light is energetic enough to kill living tissue. You can therefore think of the ozone layer as a “shield” that protects us from most of the sun’s ultraviolet light. 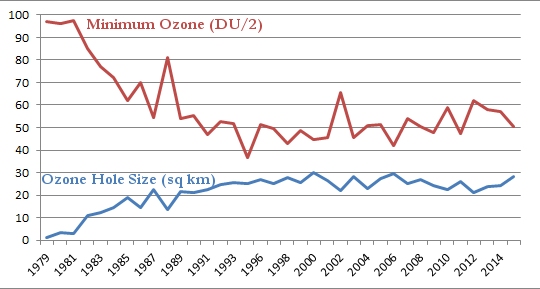 My interpretation of the data, then, is that the ozone hole is recovering, but very slowly. Why is the recovery so slow? Based on the chemistry of CFCs, this is exactly what you would expect. One of the reasons CFCs became so popular is that they are fairly inert. They don’t like to react with much of anything on the surface of the earth. As a result, they are not toxic. However, because of that, they also don’t decay very quickly. This means that even though we have stopped using CFCs, there are still a lot of them in the environment, and it will take a long time for them to decay away. Until they do, they will continue to destroy ozone when the polar vortex forms.

In the end, then, I do think the data tell us that the reduction in CFC use has helped the ozone layer. However, due to the chemical nature of CFCs, it will take a while for this to have a strong effect on the depth and size of the ozone hole.

8 thoughts on “Did We Really Save the Ozone Layer?”