I am working on an elementary science series right now, and I am up the point where I am looking for images to use in the first book of the series. While looking for images that were constructed using infrared light, I came across this one and thought it was really cool (click for credit): 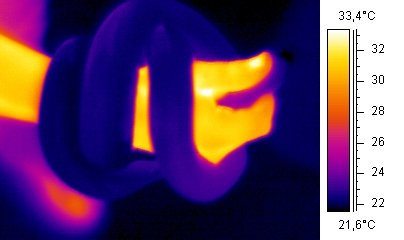 The image is what an infrared camera sees when it looks at a snake wrapped around a person’s arm.

Using an infrared-sensitive camera to make such images is called thermography, and it can be used for various purposes, including seeing people in the dark.

Now it turns out you don’t need a thermographic camera to “see” infrared light. A cheap digital camera (like a cell phone’s camera) is sensitive to infrared light and can even take pictures of it. To see this for yourself, get a television remote control and look at the end. You should see a bulb or a glassy area. That area emits infrared light signals, which send instructions to the television.

12 thoughts on “I Thought This Was Cool”