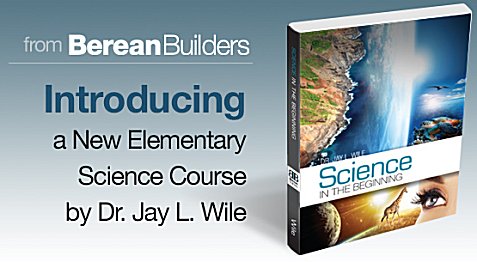 Well, God clearly has a sense of humor, because over the past three years, I have been doing just that! It wasn’t my idea. Honestly. When I left my previous position three years ago, I tried to write a math program. I worked hard on it for about two months, and when I looked at it critically, I realized that it just wasn’t very good. I showed it to a math teacher I respect and admire, and he quickly agreed!

As I prayed about what I should be doing, a conversation I had with a brother in Christ kept coming back to my mind. He suggested that I should write an elementary science course that used the days of creation as detailed in Genesis to introduce scientific concepts. The more I prayed about it, the more comfortable I became with the idea, so I started writing a course I originally called Science in the Creation Week, a title my lovely and patient wife never liked.

I decided to change the title of the course when I started seriously praying about what the rest of the series would cover. It seemed to me that the Lord was leading me to write a series that introduced scientific concepts in historical context. Since the creation account in Genesis is the beginning of history, it made sense to call the course Science in the Beginning. Now that I have spent three years writing, I can present an overall plan for the series.

Every lesson has an experiment or a hands-on activity. Don’t worry! The experiments are not complicated, and they don’t require any special equipment. They use simple, household items to demonstrate remarkable scientific truths, and they work for most families. The course was field-tested by homeschoolers in order to ensure this. If an experiment needs a special condition (like a sunny day) or needs to sit for an extended amount of time, you are warned ahead of time so you can plan accordingly.

The course is truly multigrade. Every lesson has three levels of review, and you can choose the level that best fits each individual student. The youngest students just orally answer two questions to review the lesson. The older students have a simple notebooking assignment, and the oldest students have a more detailed notebooking assignment. There are tests (and answers) for the course, but I don’t think they are necessary. In fact, I really recommend that you don’t use them. However, if you think they are necessary, the tests and their answers are included in the Helps and Hints book that accompanies the student text. You will also find the answers to the review exercises there, as well as a few helpful hints.

Each book in the series will be structured in the same way, so the only thing that changes with each book is the content. The second book in the series is called Science in the Ancient World, and it covers the science that was discovered from the time of Thales (a Greek philosopher who lived around 600 BC) to the time of Leonardo da Vinci (who lived from AD 1452 to 1519). Rather than spending a lot of time on the history, however, it focuses on the individuals. The student learns about the people and what they discovered, as well as how those discoveries helped us understand God’s creation.

I strongly recommend that the parent covers the courses in chronological order. However, that’s not necessary for the students. As your children begin homeschooling, they can join in with the other children, regardless of the book that is currently being studied. When a lesson deals with a concept that was covered in a previous course, the Helps and Hints book that accompanies the student text will remind the parent which book and which lesson covered the concept. That way, if the parent doesn’t remember the concept, she will be able to quickly look back and review. This will help her explain the concept to any children who weren’t being homeschooled when the previous book was covered.

Why do I think it’s a good idea to study science in a historical context? There are four reasons. First, students need to see that science is a process. If they study science historically, they will see how one person produces a bit of scientific progress, but in order for that progress to continue, someone else has to build on the first person’s work. As more scientists build on the work, even more progress is made. This gives the student a realistic view of how science works.

Second, the history of science is filled with scientists getting it wrong over and over again. Vesalius, for example, wrote the first modern book on human anatomy. However, he was wrong about a large amount of what he wrote. He even got the function of the heart wrong! Nevertheless, without his work, it probably would have taken a lot longer for us to figure out what we know now about the human body. Hopefully by studying this series, students will understand that even when scientists are miserably wrong, they can still help to advance our understanding of God’s creation.*

Third, the history of science is filled with devout people who were studying the world around them in order to learn more about its Creator. As the student learns about the Christian faith of these great scientists, it will become clear what many historians of science admit: The science we have today is a product of the Christian faith.

Finally, a historical approach to science revisits scientific concepts over the course of time. This allows for valuable review and repetition, which helps the student remember the concepts. At the same time, however, it is not a boring kind of repetition. Each time a concept is revisited, it is done in the context of a new person, and more importantly, it is done in the context of how the previous idea was refined to make it more correct. This makes the repetition interesting!

NOTE:
* A parent asked me this question, and I thought it would be a good one to answer: “Does this approach mean that the students will learn scientifically incorrect things for most of the course?” No, it does not. The course mostly concentrates on what the scientists got right. However, it does discuss the things they got wrong from time to time, because such instances can be a valuable illustration of how science progresses. If the course discusses an errant concept, it always tells the student the idea is wrong and that it will be corrected later on.
Return to Text