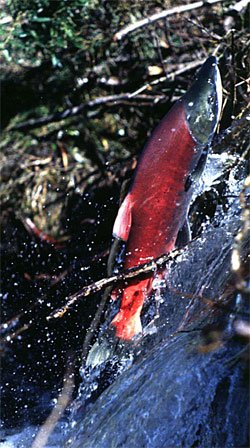 A sockeye salmon jumps a beaver dam to get back to the stream from which it hatched. (Click for credit)

Salmon have an incredible lifecycle. They hatch in freshwater streams, eat and mature a bit, and then they make their way into the ocean. They do most of their growing and maturing in the ocean, and when they are ready to reproduce, they return to the very stream from which they hatched to find a mate and begin the cycle all over again.

A lot of research has been done trying to figure out how the salmon know the way back to the specific stream from which they hatched. Well, each stream has it own mix of soil, rocks, and other environmental elements. As a result, each stream has its own specific mix of chemicals. Most of the data indicate that a salmon remembers the specific chemical makeup of its original stream. Once it gets back to freshwater, then, it starts following a “chemical trail” that will lead it back to the stream from which it hatched.1

While this is rather impressive, it doesn’t really tell us about the most difficult navigational aspect of the journey. The salmon spends a long time in the ocean growing and maturing. As a result, it often ranges far from the place where it entered the ocean. How does it find its way back to the correct freshwater inlet that will lead to the correct stream? It seems hard to believe that it could follow a “chemical trail” that far! Since we know that salmon are equipped with biological machinery that allows them to sense the earth’s magnetic field, it has been thought for some time that salmon use magnetic guidance to get them to the proper freshwater inlet.2

While that’s a reasonable conclusion based on what we know, there hasn’t been a lot of evidence to back it up. However, a recent study published in Current Biology has begun to remedy that situation.

In this study, the researchers analyzed 56 years worth of fisheries’ data on Fraser River sockeye salmon. These salmon spend two years in the ocean before returning to Fraser River in British Columbia, Canada. They then navigate the river to find the specific stream in which they were born. Interestingly enough, however, the fish have to make a choice before they reach the river, because Vancouver Island stands between the river and the open ocean. So the fish must either navigate around the northern side of the island or the southern side of the island to reach the river.

This leads the authors to conclude that as the salmon leave the river and hit the ocean, they “imprint” the details of the earth’s magnetic field at that point. That way, when it is time to reproduce, they can use the earth’s magnetic field to guide them back to the river they originally used to enter the ocean. Once they reach the river, they eventually switch to chemical guidance, which leads them to the specific stream from which they hatched.

2. Bror Jonsson, Ecology of Atlantic Salmon and Brown Trout: Habitat As a Template for Life Histories (part of the Fish and Fisheries series), Springer 2011, pp. 293-294
Return to Text