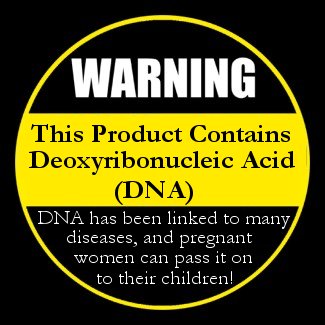 A possible warning label for food?

As a nation, we seem to be addicted to surveys. We want to know what other people think about politics, education, celebrities, music, television shows, movies, science, etc. I have never understood that. While I might find a survey interesting from time to time, I honestly don’t worry much about what most people think. Perhaps that’s why it doesn’t bother me when people complain about my “contrarian” views, as one professor recently described them. While I strongly value the opinions of many people I know, I really couldn’t care less about what the majority of people (including the majority of scientists) think.

Well, I recently came across a survey that might help me understand why the opinion of the majority means little to me. It was done by the Oklahoma State University Department of Agricultural Economics. This particular survey is performed online monthly and tries to track “consumer preferences and sentiments on the safety, quality, and price of food at home and away from home with particular focus on meat demand.” Even though most of the questions on the survey are consistent from month-to-month, ad hoc questions can be added.

Now, of course, I suspect that most of my readers are educated enough to understand how silly it is to want mandatory labels on foods that contain DNA. However, just in case it escapes some people: Most of the food we eat contains DNA! When you eat a vegetable, for example, you are eating plant tissues that are made up of plant cells. Each and every cell holds the plant’s DNA in its nucleus. When you eat meat, you are eating an animal’s muscles, which are composed of muscle cells. Once again, muscle cells contain the animal’s DNA. It is very difficult to eat without ingesting the DNA of the organism you are eating!

Think about that for a moment. In this survey, 82% of people think there should be a warning label on foods that were produced with genetic engineering. However, the majority of those people also think there should be a warning about something that is in nearly every food we eat! Why in the world should we take advice about genetically-modified food from people who clearly don’t know much about the very molecule that is modified to make those foods? Also, since there were fewer people who supported mandatory calorie labels on restaurant foods, at least some of the people who are worried about DNA being in food don’t seem to be worried about how restaurant food can contribute to a real health issue: obesity!

This survey tells me two things: First, science education in the U.S. is abysmal. Of course, there are lots of other things that have already demonstrated that! Second, we shouldn’t listen to surveys when it comes to making decisions.