I remember the 1994 eclipse. I was on the faculty at Ball State University, teaching chemistry and physics. I told all my students about the eclipse, and when it came time to view it, I joined a few of the university’s staff watching the eclipse with welder’s goggles, pinhole viewers, and even natural pinhole viewers made by the foliage of the trees. As we watched, a few people joined in. Most of them had no idea that the eclipse was happening until they saw us looking at it.

Well, the 2017 eclipse was very different! Because of social media, a lot more people knew about and planned for the eclipse, so my Facebook feed was filled with awesome photos of people watching the eclipse, the eclipse itself, and the effects that the eclipse had on the surroundings. While I agree that social media has a lot of negative effects on our culture, it also has some positive effects, and the eclipse highlighted one of those. Social media has made it much easier to “get the word out” on a variety of issues, including science-related events that people can experience.

I thought I would share some of my photos of the eclipse as well as some better ones, providing “color commentary” as I go. Before I do that, however, I would like to just make a comment about how some people, like Eric Metaxas, view an eclipse as evidence for God’s existence. The argument goes something like this: the sun is 400 times larger than the moon, but it is also 389 times farther from the earth. As a result, they each take up roughly (not exactly) the same amount of space in the night sky. Without this pleasant “coincidence,” a total solar eclipse could not happen. Of course, it is no coincidence. It is another piece of evidence for the fact that our solar system is designed.

While I think that nature explodes with evidence of design, I am not sure this is really one of those evidences. Sure, it represents an interesting example of “balance” between natural variables, and it certainly makes for an awesome sight. But honestly, it’s only four parameters (two distances from earth and two sizes). It’s not all that improbable for four different parameters to be balanced as a result of mere chance. In addition, those parameters are somewhat constrained, because we need a large moon for healthy oceans that can support life and a reasonably small, “gentle” star for our energy source. So while I think that the moon and the sun both provide strong evidence for the idea that our solar system is designed, I don’t think the fact that they can produce a total solar eclipse does.

As I discussed in a previous post, I think the safest way to view an eclipse is with some sort of projection viewer. In my elementary course, Science in the Beginning, I have students build such a projector using binoculars so that they can look for sunspots. I set up something very similar to view the eclipse: 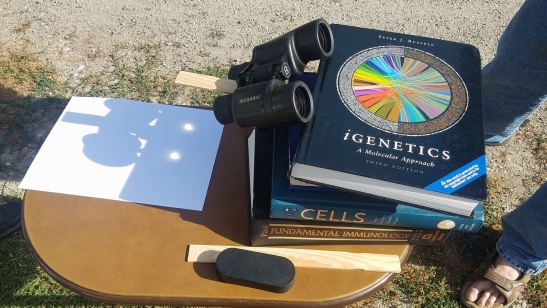 This picture shows the moment that I could first see the eclipse starting:

This one shows it progressing:

This one shows the maximum coverage that we could see where we were at the time (Montana):

Of course, my amateur photos don’t do the eclipse justice, so I also want to show better ones, like the one at the top of the post, where NASA catches the International Space Station passing between the earth and the sun during the eclipse.

Here’s a photo (click for credit), showing the total eclipse as seen in Corvallis, Oregon. This is often called the “diamond ring effect,” caused by the fact that the moon’s surface is rugged, allowing a bead of light to pass through the eclipse.

I want to end with what I think is the coolest one. It’s not of the eclipse itself, but of the moon’s shadow as seen from the International Space Station: 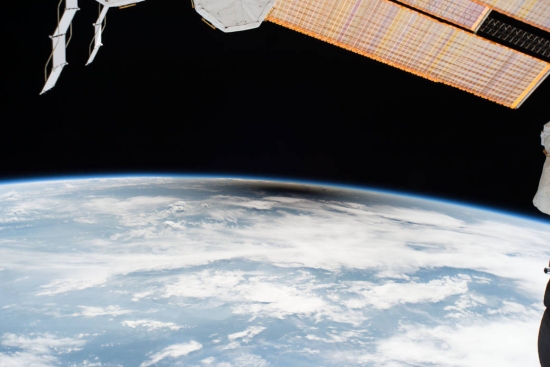 The dark spot you see is the core of the moon’s shadow being cast on the earth. It is called the umbra, and wherever it lands, you see an eclipse.

11 thoughts on “Thoughts and Pictures from the Eclipse”