The National Geographic headline says it all:

Biggest Walrus Gathering Recorded as Sea Ice Shrinks
More than 35,000 of the marine mammals have congregated in Alaska

Unfortunately, the headline isn’t true. It isn’t the biggest walrus gathering, and it’s not clear such gatherings have any relationship whatsoever to the amount of sea ice that exists in the Arctic. Where did National Geographic get their false information? From the United States Geological Survey (USGS).

The National Geographic article goes on to say:

Scientists have seen large haul-outs on the Russian side of the Bering Strait for quite some time, says Anthony Fischbach, a wildlife biologist at the USGS in Anchorage. But since the first recordings of walrus gatherings in Alaska in the 1870s, groups of this size weren’t observed until 2007, he said.

Of course, that’s also not true. Either the scientists at the USGS didn’t bother to check the literature on what they have been studying, or they willfully ignored the recorded observations of the past. This is not the largest haul-out on record for walruses, and haul-outs of this size have been observed several times in the past.

In case you are not familiar with the term, a “haul-out” refers to when marine mammals known as pinnipeds (true seals, sea lions, fur seals, and walruses) leave the water and pull themselves onto land or ice. This behavior is normal, as it is often a part of mating and giving birth. In addition, it sometimes aids in the avoidance of predators, gives individuals the ability to share their heat, and allows for a specific kind of feeding. The USGS isn’t trying to make the case that walrus haul-outs are unusual. It is simply claiming that the one seen this year is the largest ever recorded, that such large haul-outs did not happen until 2007, and that it is associated with the decline in Arctic sea ice. Let’s look at these claims one by one.

Such large haul-outs did not happen until 2007. Not true. The same paper cited above tells us that in addition to the largest haul-out ever recorded, 1978 saw an estimated 35,000 walruses haul out on Maknik Lagoon, and an estimated 32,000 haul out on North Punuk Island. In 1968, an estimated 33,000-35,000 walruses hauled out at Cape Blossom on Wrangell Island.2 Another haul-out occurred there in 1972, with an estimated population of 36,000.3 Now remember, these are just the ones that were recorded. I suspect there were many others that simply didn’t make it into the scientific literature.

Large haul-outs are associated with the decline in Arctic sea ice. I can’t say that this is not true, but the evidence is certainly stacked against it. Consider the following graph, which comes from a study on Arctic sea ice extent from 1953 to 2011:4 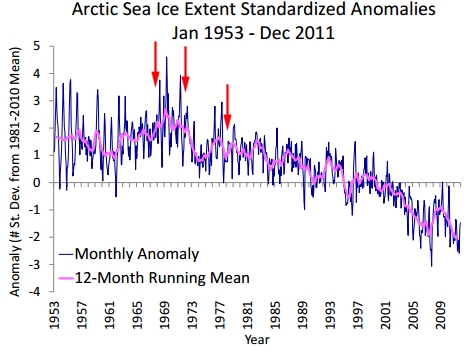 I have used red arrows to mark the three years in which large haul-outs were recorded in the scientific literature, and you can see that there seems to be no relation to the amount of sea ice. In 1968 and 1972, Arctic sea ice was, on average, higher than it had been in the recent past, and much higher than it is today. Also, note that there has been a rather steady decline of Arctic sea ice since 1983, but according to USGS biologist Anthony Fischbach, large haul-outs have only been sighted since 2007. It seems to me that if declining sea ice were to blame, large haul-outs should be increasing in frequency since 1983. That doesn’t seem to be the trend from the recorded haul-outs.

Now, of course, the word “recorded” is the key. Large haul-outs might have occurred in the past without being recorded, and I also probably missed some that were recorded in the literature. Thus, we cannot rule out declining Arctic ice as a possible cause of these large haul-outs. It just seems that the weight of the evidence stands against it.

Nevertheless, it is very clear from the literature that the recent large haul-out seen is not the largest, and such large haul-outs were seen long before Arctic sea ice started to dwindle. It is unfortunate that the USGS didn’t do their homework before jumping on the “global warming” bandwagon.

2. Gol’tsev, V. N., “Dynamics of coastal herds of walruses in connection with their distribution and numbers,” In: Arsen’ev, V. A. and Panin, Pinnipeds of the North Pacific, Pischevaia Promyshlennost 1968, pp. 205-215
Return to Text