If you watched the lunar eclipse on September 27th, you were treated to quite a sight! My wife got some great pictures of it, two of which are shown above. The image on the left is a picture she got with her camera alone, and the one on the right is what she got with her camera looking through my telescope. That was a particularly difficult shot, because the camera wasn’t designed for the telescope. She just pointed her camera at the eyepiece and patiently played with its orientation until she got the best shot she could.

The eclipse was beautiful, but it did produce something unexpected: a dark moon. Now, this eclipse was supposed to be dark, because the moon was at its perigee, which is the closest it gets to the earth. As a result, the earth’s shadow covered it a bit more thoroughly than it would have if the moon had been farther from the earth. Nevertheless, a lunar eclipse doesn’t make the moon go completely dark, because sunlight is bent through the earth’s atmosphere and shines on the moon. The process of sunlight traveling through the atmosphere produces a noticeable effect.

Sunlight is composed of many different wavelengths of light, each of which corresponds to a color that we perceive. The longest wavelengths of sunlight are red, while the shortest wavelengths are blueish. The other colors (orange, yellow, and green) are in between. Because wavelength and energy are inversely proportional, red sunlight is lowest in energy, and blue sunlight is highest in energy. Once again, the other colors are in between. Well, when sunlight passes through the atmosphere, it can bounce off particles and molecules floating in the air. Higher-energy light tends to bounce off more things than lower-energy light, so as sunlight passes through the earth’s atmosphere, the blues and greens tend to bounce around more than the reds, oranges, and yellows.

This is why the sun appears reddish-orange at sunset. When you look at the sun, the light you see is traveling straight from the sun to your eyes. The closer the sun is to the horizon, however, the more atmosphere its light must travel through to reach your eyes. Since the blues and greens tend to bounce off things in the air, they don’t travel as straight as the reds and oranges. As a result, more red and orange light coming from the sun hits your eyes than blue and green light, so the sun appears reddish-orange when it is near the horizon. The same effect causes the moon to appear reddish-orange during a lunar eclipse.

Of course, all of this is well-understood, so long before the lunar eclipse happened, some astronomers had calculated how bright the moon should have been during the lunar eclipse. When astronomers actually observed the moon, however, it was measurably darker. The graph below comes from Universe Today. It shows the expected brightness (magnitude) of the moon (red curve) compared to the observed brightness (blue curve). 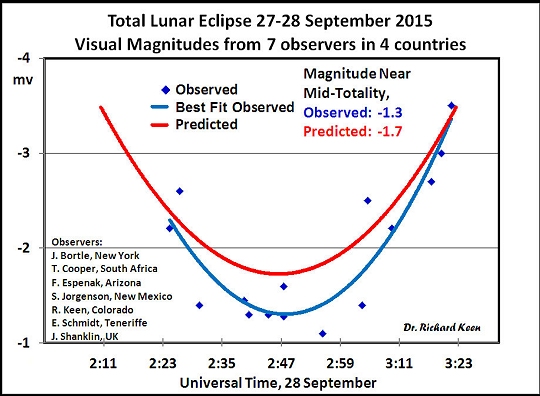 Why was the moon darker than expected? We don’t know for sure, but Universe Today suggests that it is the result of small solid and liquid particles, collectively known as aerosols, floating in the atmosphere. The eruption of Chile’s Calbuco volcano five months ago spewed lots of dust and ash in the air. Most likely, some of those aerosols have yet to settle back to the ground. In addition, the forest fires in Canada and the Western U.S. this summer put lots of smoke particles in the air, and some of those aerosols probably haven’t settled out of the atmosphere, either. Finally, human-produced pollution is probably to blame as well. When we burn coal and oil for energy, it produces aerosols that linger in the atmosphere.

Imagine that. The lunar eclipse was both beautiful and informative!

5 thoughts on “What We Learned from the Recent Lunar Eclipse”