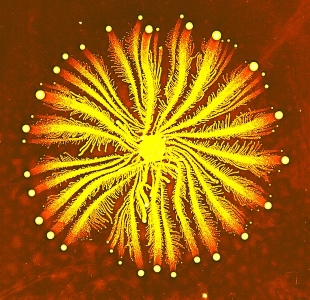 A colony of bacteria similar to the one analyzed in the study being discussed. (click for credit)

Back when I went to university, I was taught (as definitive fact) that bacteria evolved resistance to antibiotics as a result of the production of antibiotics. This was, of course, undeniable evidence for the fact that new genes can arise through a process of mutation and natural selection. Like most evolution-inspired ideas, however, the more we learned about antibiotic resistance in bacteria, the more we learned that there was a problem. It turns out that some cases of antibiotic resistance in bacteria were not caused by antibiotic-resistant genes. Instead, they were caused by the deterioration of genes that exist for other purposes. For example, the Anthrax bacterium can develop resistance to a class of antibiotics called quinolones, but it is the result of a mutation that degrades the gene that produces gyrase, the enzyme that those antibiotics attack. This allows the bacterium to survive the antibiotic, but the degraded gyrase gene causes the bacterium to reproduce much more slowly.

Now an even more impressive study has been released. In it, researchers analyzed the DNA of a bacterium from the genus Paenibacillus. These bacteria form colonies, such as the one shown in the image above. The colors in the image indicate the density of bacteria – the brighter the yellow color, the higher the density of bacteria. While this genus of bacteria has been found in many, many environments, the specific species analyzed in the study was special: it has been living in a cave that has been isolated from the modern world. In fact, the cave is so isolated that no animals had ever ventured into it. When the researchers analyzed the DNA of this bacterium, they found all sorts of antibiotic-resistant genes.

In fact, they found that this bacterium was already resistant to most modern antibiotics, and they get this resistance from the same genes as pathogenic bacteria that have already been studied. In other words, the resistance to these antibiotics isn’t anything new. It didn’t come about as a result of the production of antibiotics. It has been in bacteria all along. The only thing antibiotics did was expose the fact that such genes already existed.

Now if this was the only conclusion in the paper, I probably wouldn’t have written about it. After all, we already know that the evolution-inspired explanation for antibiotic resistance isn’t correct. We know that bacteria possessed antibiotic-resistant genes long before the development of antibiotics, and when “new” antibiotic resistance arises, it is from mutations that deteriorate genes which already exist.

However, the thorough analysis done by the authors of this paper showed something else: potential antibiotic-resistant genes that had not yet been identified! In this bacterium, which had never been exposed to antibiotics, the researchers actually found five new families of genes that could potentially be used by bacteria to fight antibiotics! They say that these families of genes are widespread in the environment and can have clinical significance if they end up being transported into pathogenic bacteria. In other words, there are “stockpiles” of antibiotic resistant genes residing in bacteria that are not disease-causing. Since we know bacteria are adept at gaining genes from other bacteria, these stockpiles will probably find their way into disease-causing bacteria, producing even more antibiotic resistance.

Far from being evidence for flagellate-to-philosopher evolution, then, antibiotic resistance is evidence against it! After all, it shows that from a genetic point of view, there is nothing new being developed. There are only antibiotic-resistant genes that existed long before antibiotics, and there are mutations that degrade genes which also have existed long before antibiotics. This is precisely what you would expect in a creationist framework.