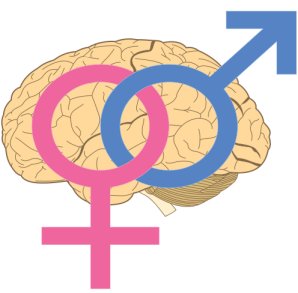 Male DNA was found in 63% of the women studied.
(Public domain image)

A gene called DYS14 is found only on the Y chromosome in human beings. Of course, only males have a Y chromosome, so it is reasonable to assume that the only place you will ever find this gene is in men, right? Wrong! William F. N. Chan and his colleagues examined the brains of 59 deceased women, and they found the gene residing in 37 of the brains studied! In other words, 63% of the deceased women studied had male DNA in their brains. Interestingly enough, in most of those brains, the DNA was found in several different places!1

How in the world did male DNA get into these women’s brains? The researchers aren’t sure, because they don’t have detailed medical histories for most of the women. However, the most likely explanation is that the DNA comes from the male children that these women carried. I have written about this phenomenon, called fetomaternal microchimerism, before. As I mentioned in that article, when I first heard about a baby leaving cellular remains inside his or her mother, I thought it couldn’t possibly be true. However, I was wrong. There is solid evidence to suggest that not only do babies leave a lasting, cellular imprint on their mothers, mothers do the same for their babies.

However, the possibility that children leave some of their DNA behind in their mother’s brain is very surprising. After all, the cells that make up the brain are incredibly sensitive. In fact, the contents of your own blood are toxic to your brain cells. As a result, you have an elaborately designed blood-brain barrier that shields your brain cells from your blood. This barrier is so vigilant that it allows only certain substances (such as the glucose and electrolytes that the brain cells need) to pass through it. As a result, your brain cells are protected from the majority of substances found in your bloodstream.2

Well, the authors note that the blood-brain barrier does change during pregnancy, altering slightly what can and cannot pass through it. Thus, they suggest that when a mother carries a child, some of its cells (or at least some of its DNA) pass through the altered blood-brain barrier and take up residence in the brain. What do they do when they are there? No one is sure. Indeed, the authors note:

At present, the biological significance of harboring Mc in the human brain requires further investigation. Mc appears to persist in the blood, bone, and bone marrow for decades and is present among different hematopoietic lineages. Moreover, Mc appears to integrate and generate specific cell types in tissues. (Note: The authors use “Mc” to abbreviate microchimerism)

So while we know that babies leave traces of themselves behind in their mother, it’s not clear exactly what those traces do. Nevertheless, this study provides a tantalizing possibility. As I noted in my previous post about fetomaternal microchimerism, there are some who think that the cells of a baby in his or her mother target damaged tissue and help to repair it. While there is some evidence for this idea, it remains very controversial. However, this particular study provides a tiny amount of evidence to support that idea.

The authors note that 33 of the deceased women in their study had Alzheimer’s disease. They found that these women had a lower prevalence of male DNA in the brain and lower concentrations of that DNA in regions that are most affected by Alzheimer’s disease. The authors are quick to note, however, that their sample size is very small, so it is possible that this correlation is nothing more than a statistical anomaly. However, if it is confirmed in other, more statistically-significant studies, it suggests that the remains a child leaves behind in his or her mother’s brain might be fighting against neurological disorders like Alzheimer’s disease!

Regardless of whether or not that’s true, these results and others strongly suggest that babies leave traces of themselves throughout their mother, including in their mother’s brain. Further studies on this very interesting phenomenon will hopefully tell us more about why this is the case.

3. Paul M. Gahlinger, Illegal Drugs: A Complete Guide to Their History, Chemistry, Use and Abuse, Plume 2004, p. 132
Return to Text