If you hadn’t already guess it by now, I am a nerd. As a result, you will probably not be surprised by the fact that I have been a fan of J.R.R. Tolkien’s The Lord of the Rings since I first read the series in the late 1970s. More importantly, however, I am married to one of the world’s biggest fans of the trilogy. She knows pretty much everything about the books and their talented author, and in her mind, they tell the best fictional story ever told. She also liked the movies that were made based on the books, even though she had some issues with them. As a result, when we went on a speaking tour of New Zealand several years ago, we wanted to see at least some of the sites where the films were made.

Pretty much the only place that looks anything like it did in the movies is Hobbiton, the town where Bilbo Baggins lived. My wife and I toured it eagerly and were thrilled to learn that we could actually go into Bilbo’s “home,” Bag End. In actuality, the inside of Bag End seen in the movies wasn’t at the Hobbiton set. It was on a sound stage somewhere else. However, the owners had excavated a small cave behind Bag End’s entrance. We went in, and she took the photo you see above, allowing us to always remember the view from Bag End.

Why am I telling you all of this? Because I ran across a very interesting article entitled, I Was an Atheist Until I Read “The Lord of the Rings.” The title alone is intriguing enough, but longtime readers of this blog are probably aware that I collect stories about atheists who became Christians. If this story isn’t a perfect fit for my blog, then, I don’t know what is!

END_OF_DOCUMENT_TOKEN_TO_BE_REPLACED

Back when I went to university, I was taught (as definitive fact) that bacteria evolved resistance to antibiotics as a result of the production of antibiotics. This was, of course, undeniable evidence for the fact that new genes can arise through a process of mutation and natural selection. Like most evolution-inspired ideas, however, the more we learned about antibiotic resistance in bacteria, the more we learned that there was a problem. It turns out that some cases of antibiotic resistance in bacteria were not caused by antibiotic-resistant genes. Instead, they were caused by the deterioration of genes that exist for other purposes. For example, the Anthrax bacterium can develop resistance to a class of antibiotics called quinolones, but it is the result of a mutation that degrades the gene that produces gyrase, the enzyme that those antibiotics attack. This allows the bacterium to survive the antibiotic, but the degraded gyrase gene causes the bacterium to reproduce much more slowly.

Now an even more impressive study has been released. In it, researchers analyzed the DNA of a bacterium from the genus Paenibacillus. These bacteria form colonies, such as the one shown in the image above. The colors in the image indicate the density of bacteria – the brighter the yellow color, the higher the density of bacteria. While this genus of bacteria has been found in many, many environments, the specific species analyzed in the study was special: it has been living in a cave that has been isolated from the modern world. In fact, the cave is so isolated that no animals had ever ventured into it. When the researchers analyzed the DNA of this bacterium, they found all sorts of antibiotic-resistant genes.

END_OF_DOCUMENT_TOKEN_TO_BE_REPLACED

At university, I was taught (as definitive fact) that the scales on reptiles slowly evolved into feathers. While you can still find this idea in popular literature, serious evolutionists no longer suggest it, because there is simply too much evidence to the contrary. Most evolutionists today suggest that feathers, scales, and hair all evolved from a common ancestral structure. I am sure that if serious scientists are still discussing flagellate-to-philosopher evolution in 50 years, there will be yet another idea of how these structures evolved.

Because evolutionists no longer think that feathers evolved from scales, the currently-fashionable thing to teach as definitive fact is that at least some (if not all) dinosaurs had feathers. The problem is that solid evidence to back up this “fact” has been sorely lacking. There are some dinosaur fossils that give hints of feathers, but there are alternate interpretations of what those hints mean. There are other fossils that clearly show feathers, but it’s not clear the fossils are of dinosaurs.

Now all that has changed, at least according to some sources, because of a recently-reported fossil. The remarkable specimen (pictured above) is part of a tail that has been encased in amber. The amber has preserved both the bones in the tail and the feathers that covered it, giving paleontologists a superb sample to analyze. While the results of the analysis are not conclusive, I do think that they add to the case that at least some dinosaurs had feathers.

END_OF_DOCUMENT_TOKEN_TO_BE_REPLACED 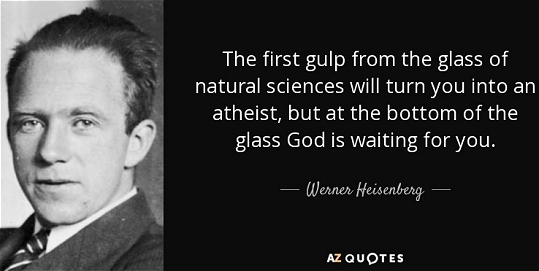 If you have spent much time on the internet, I am sure you have seen memes like the one shown above. They usually contain a picture and some sort of message. I really enjoy the funny ones, but I typically don’t like the serious ones. It’s not because I don’t enjoy being serious. It’s because you rarely know whether or not the information in the meme is trustworthy. Consider, for example, the meme shown above. It attributes a quote to Dr. Werner Heisenberg, a giant in the field of quantum mechanics. Indeed, his work continues to guide our understanding of the atomic world. I fully agree with the quote, and I deeply respect Dr. Heisenberg. There is only one problem: the meme is almost certainly false.

A Facebook friend posted it on my wall because she knew that I would agree with it. However, I had read a lot of Heisenberg’s work, and the quote didn’t seem to fit the person who I had come to know through my reading. Consider, for example, his main work on the relationship between science and religion. It is called “Scientific Truth and Religious Truth,” and it was published in 1974 (two years before his death) in Universitas, a German review of the arts and sciences. In that work, he seems to argue that science and religion each arrive at truths, but the truths are unrelated to one another. Consider, for example, his own words:

The care to be taken in keeping the two languages, religious and scientific, apart from one another, should also include an avoidance of any weakening of their content by blending them. The correctness of tested scientific results cannot rationally be cast in doubt of religious thinking, and conversely, the ethical demands stemming from the heart of religious thinking ought not to be weakened by all too rational arguments from the field of science.

This is a common view among religious scientists. It often called the “Nonoverlapping Magisteria” (NOMA) view, and it was championed by Dr. Stephen Jay Gould, an ardent evolutionary evangelist who died in 2002. I strongly disagree with the NOMA view, so when I read Dr. Heisenberg’s work, I was disappointed that he seemed to hold to it.

END_OF_DOCUMENT_TOKEN_TO_BE_REPLACED

What does it mean to be a father? When my wife and I adopted our only child, I thought a lot about that question. I came up with various answers, none of which were really satisfactory. However, something happened on Tuesday night that put it all into focus for me: my own father passed into the arms of his Savior. The event wasn’t a surprise. From the time I was in high school, my dad had severe health issues. However, over the past year and a half, his health deteriorated severely. More than a week ago, he stopped getting out of bed. A few days ago, he stopped eating. We all had time to prepare for the inevitable.

Of course, when the inevitable actually occurs, you find you aren’t prepared for it at all. The reality is that even when a person is bedridden and hardly able to muster the energy to speak with you, he is still there. When he dies, he is no longer there. He is simply gone, and there is no way to prepare oneself for that. Because of this gaping hole left in your world, you are forced to think about things differently. As a result, I think I have finally come up with the answer to my question.

While writing his obituary, I was forced to think about who my dad was. He was a sailor, having defended freedom in World War II and the Korean War. He was a part of the criminal justice system. He was a tireless volunteer for the Republican party, his church, and many community organizations. But of course, to me, he was much more than that. He was my dad. And he was really, really good at it.

What made him good at it? I thought about that question for a long, long time, and suddenly, a quote popped into my head. It was from a book on parenting I had read while we were in the process of adopting our daughter. The book itself was so unremarkable that I don’t remember its title. Perhaps because it was in such an unremarkable book, the quote meant little to me at the time. However, in the light of thinking about my own father’s life, its profound truth struck me. With a little help from Google, I got the actual quote as well as its source. When speaking of his own father, Clarence Budington Kelland said:

He didn’t tell me how to live; he lived, and let me watch him do it.

In a nutshell, that’s why my dad was such a good father. He showed me, on a daily basis, how a Christian man should live. He demonstrated to me how a man cares for his family, how a man prioritizes his life, and how a man deals with those who are less fortunate than himself.

Howard Edmund Wile showed me how to live. When I see him in heaven, the first thing I am going to do is thank him for that.