About two weeks ago, I spoke at the Greater St.Louis Area Home Educators Expo. It was an excellent convention. One of the sessions I did was entitled “Q & A With Dr. Wile.” It was a forum where students and parents could ask me questions about pretty much anything. Well, the convention wanted to make sure they had plenty of questions in case there weren’t many from the audience, so they solicited questions on their Facebook page and in one of their popular homeschool co-ops. Since there were plenty of questions from the audience, I didn’t get a chance to answer many of the ones that came in before the convention, so I wanted to answer a few of them now. Here they are, in no particular order:

What is your favorite play or part you have done?

My favorite play is The Fantasticks by Harvey Schmidt and Tom Jones. It’s a wonderful “boy meets girl” story with a couple of really good twists. It is the world’s longest-running musical, with the original production running off-Broadway for a total of 42 years. I have had the honor of playing two parts in the show: El Gallo (the narrator) and Henry (an old actor). El Gallo is also my favorite part.

I am actually currently in rehearsals for another production of The Fantasticks! This time, I play one of the nerdy fathers, which is a perfect fit for me. Here is a picture of me, my (fictional) daughter, the other father, and his (fictional) son at one of the rehearsals. We aren’t in costume, but I am wearing the hat I will wear in performances: 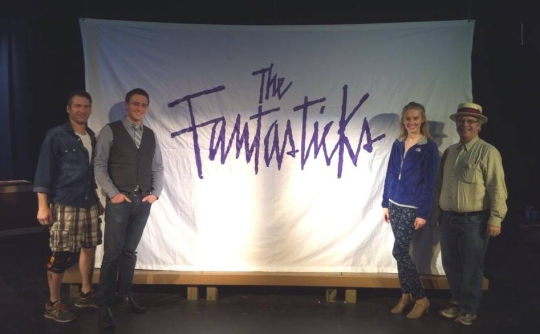 Do you perform Drama in a ministry setting, or just community theater?

I do both. In fact, I have a section here on my blog that contains original scripts I have written for my church’s drama ministry.

What is your favorite song to play on piano?

Back when I had time to really play the piano, it was the first movement of Beethoven’s “Sonata Pathétique.” However, that’s beyond my ability at this point in my life. My favorite piece now is an arrangement of “Amazing Grace” by Cindy Berry. It starts off as Edvard Grieg’s “Morning Mood,” moves into “Amazing Grace,” and then moves back into “Morning Mood.” It is stunningly beautiful, and I love it because “Amazing Grace” is my favorite hymn. I actually wrote a play about it a few years ago.

What do you recommend for someone who really enjoys the arts and science how to combine the two?

I would recommend continuing to study both. There are a lot of ways that the arts and science can be combined, but you need to know both of them well to see the connection. I personally do the arts for worship and as a hobby, while science is my “job.” However, there are people who merge them both into their occupation. Some artists, for example, are medical illustrators. Some are microscopists, because taking photos of microscopic organisms and structures is part art, part science. Many scientists use their knowledge of chemistry and physics to restore or analyze ancient works of art. I even met a physicist who analyzed musical instruments to see if there were identifiable reasons why one instrument (like a Stradivarius), is better than another instrument (like a Walmart special). Here is an online magazine that merges art and science.

Since you were a homeschool Dad, I’m curious what your favorite math curriculum was?

As a homeschool dad, I tried a few of different curricula, but none of them worked for my daughter. In the end, I used my old math books from college and taught her myself. That seemed to work best for her. However, if you were to ask for my favorite now, it would have to be Videotext Interactive.

Is it good to study evolution even if you are a creationist?

Absolutely! In fact, I would say it is necessary to study evolution if you are interested in science at all. After all, there is a lot of truth to evolution. We know that species change so they can adapt to their changing surroundings, and we know natural selection is the main mechanism by which that happens. We also know that while mutations never produce novel information in the genome, they can degrade the genome’s information so as to produce a benefit in certain situations. Some antibiotic resistance in bacteria, for example, comes from mutations that degrade structures in the bacterium. At the same time, the grand view of evolution (flagellates to philosophers) isn’t scientifically plausible. Thus, if you want to understand God’s complex creation, you need to know what parts of evolution are scientifically reasonable and what parts are not. The only way to know that is to study evolution seriously!

What is an effective way for a teen (or adult) to defend their faith, not against science but WITH science.

The most effective way to defend the faith with science is to learn science as well as you possibly can. You shouldn’t study science with the aim of using it to defend your faith. That produces a warped view of science and, in my mind, a warped view of faith as well. In the end, God is the source of all truth, scientific or otherwise. Thus, you should try to learn science so you can understand the truths that it teaches us. Then, you will see how science supports your faith.

As an adult, much of my most productive science learning happened in my lab groups bouncing things off my peers. What would you suggest to help bring that sort of experience into our home school environment?

I think interaction among inquisitive people is an important part of science education. I would add this to your thought: Most of the serious science I learned at university and in graduate school did not take place in class. It took place when my study buddies and I got together and discussed the things we were studying. As a result, I would encourage doing some of your high school science in groups. I don’t recommend getting together for a formal class, but I do recommend getting together with one or more homeschooling families every now and again to do experiments, discuss what the students have been learning, do presentations, etc. Obviously, there are homeschoolers who formalize this with a co-op, where they meet once a week to do the experiments in a specific curriculum, and as long as the students still have to do a lot of the learning on their own, that’s fine. However, I don’t recommend “teaching” them the science in such a setting. One of the main benefits of home education is that it trains the student to learn independently. Don’t lose that in an attempt to produce the kinds of peer interaction that are beneficial in science.

2 thoughts on “A Few Questions and Answers”