It has been several years since I last spoke at my state’s homeschool convention. I got to end that “dry streak” this past weekend. The convention was very well attended, and it ran incredibly smoothly. I gave a total of six talks at the convention, and two of them were with Diana Waring. Diana and I spoke about Homeschooling: The Environment for Genius and Textbook Myths and How to Deal with Them. The four “solo” talks I gave were: ‘Teaching’ Jr. High and High School Science at Home, Teaching Critical Thinking, How are Homeschool Graduates Doing?, and Vaccines: The REAL Story. As I understand it, audio recordings of all these talks will eventually be available through Resounding Voice.

The vaccine talk is rather controversial in some homeschooling circles. I take a scientific approach to the issue, of course, which means I recognize that for the vast majority of people, vaccines are both very safe and very effective. As a result, I encourage people to vaccinate their children. In the homeschooling community, there is a small-but-strong anti-vaccination movement, however, so I was surprised that the convention asked me to give the talk. They did get some angry e-mails about it, but in the end, it went well, and even though I specifically asked for hostile questions, there were none. All the questions I got were very serious and very polite.

I had two big surprises at the convention. First, a former Ball State University student was at the convention, and she came up to reintroduce herself to me. It has been more than 20 years since I taught chemistry and physics at Ball State University. Also, she took chemistry 100, which is one of those “intimate” classes that contains more than 200 students, so not surprisingly, I didn’t recognize her. We talked a bit about old times, and we took a “selfie” together: 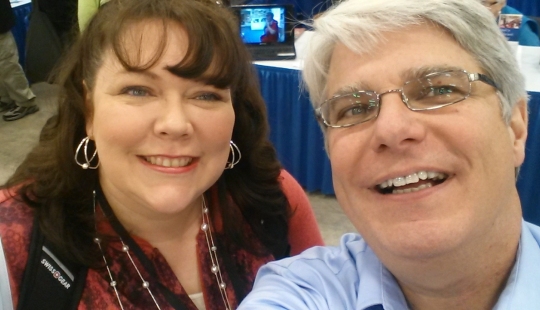 It was really fun to have her mixed in with all the homeschooling students who have used my courses over the years.

The other big surprise followed the first talk I gave with Diana Waring. It was the Saturday morning general session, so there were a couple of thousand people in the audience, and after our talk, Governor Mike Pence took the stage to say a few words to the crowd. From the time I first met him and campaigned for him when he ran for Congress, I have deeply admired him. He is one of the few politicians who I would call true statesman. The vast majority of the attendees must have agreed with me, because he was greeted with a standing ovation. He ended his talk by asking the homeschooled students in the audience to give a standing ovation to their parents for their hard work and courageous choice to homeschool them. It was a very powerful moment.

In the sessions where I spoke, there were a lot of excellent questions. I want to highlight two of them. In our second talk, Diana Waring and I discussed the various myths you find in textbooks, such as the nonsensical idea that ancient people thought the earth was flat. After that talk, someone asked about a book called A Child’s History of the World by Virgil M. Hillyer. I was not familiar with it, but as a historian, Diana was. Apparently, it has some racist chapters at the beginning, but if you get past those chapters, it is an entertaining and informative book. Well, some publishers have taken to publishing it without those racist chapters at the beginning, and the parent asking the question wondered what we thought of that.

Diana and I essentially agreed that if there is good material in a book, it is probably worth republishing, and it also makes sense to take the bad material out. However, both of us agreed that if you do that, there should be a very prominent statement to that effect. I suggested saying something like, “The first few chapters of this book have been removed because many of the statements made in them are known to be incorrect.” That way, the reader understands that the original version of the book contained some serious flaws.

The other question I want to mention came from my vaccine talk. One parent asked me what is causing the alarming rise in autism cases. I told her that some have tried to claim that autism is not on the rise. Instead, changing diagnosis criteria are mostly to blame for what seems to be a rise in autism. I told her I disagree with that. I also indicated that we probably don’t have all the answers, but we know one thing for certain: The rising age of parents is at least partly to blame. There have been several studies that indicate that the older the parents are (particularly the father), the more likely the child is to have autism. Genetic studies back that up. While that might not explain all of the increase we see in autism cases, it explains at least some of it.

I thoroughly enjoyed my time at the Indiana Association of Home Educators convention, and I hope I get to speak there again soon!

5 thoughts on “The 2015 Indiana Association of Home Educators Convention”