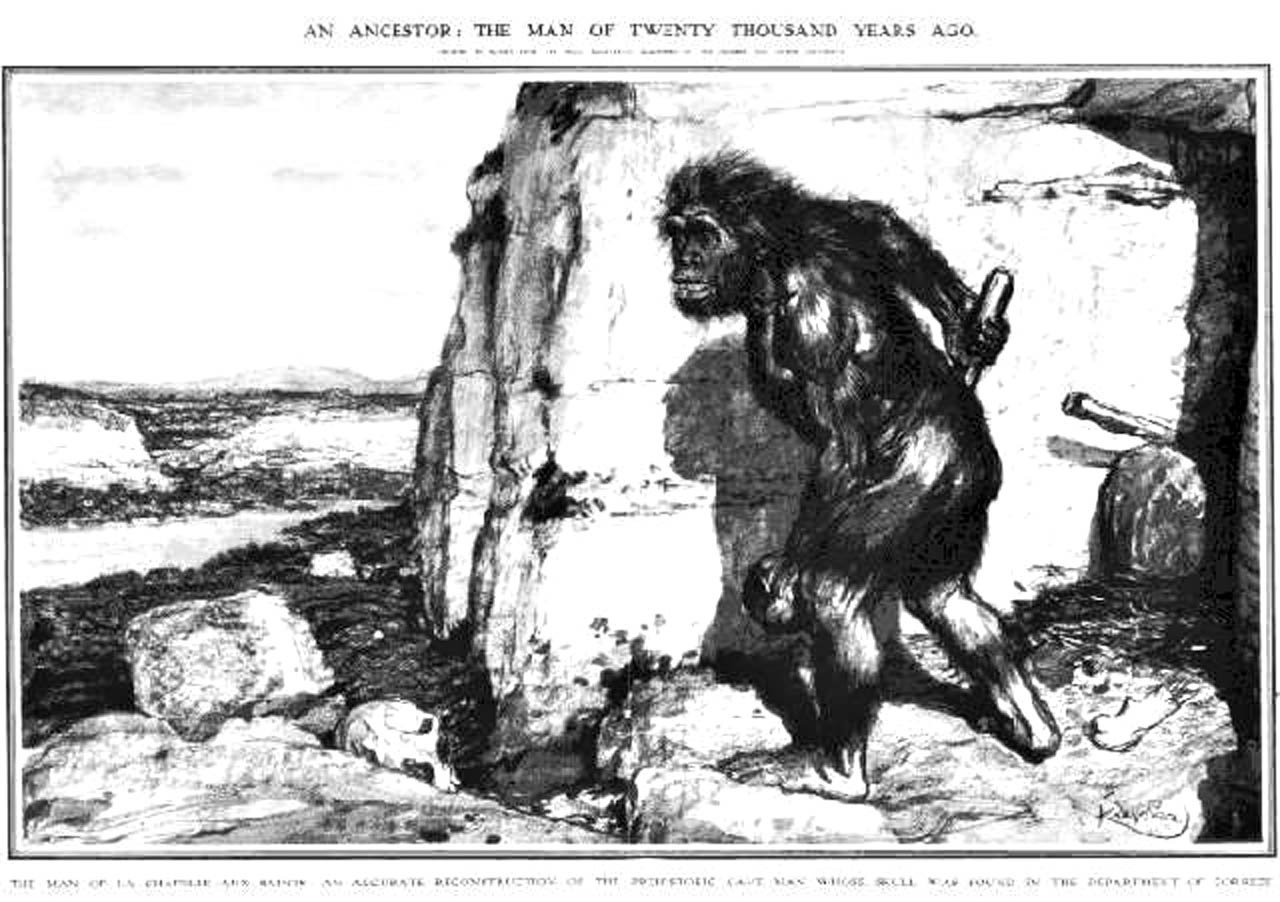 This was one of the first depictions of Neanderthal man, based on the work of paleontologist Marcellin Boule.

In 1908 a nearly-complete fossil skeleton was found in La Chapelle-aux-Saints, France. Marcellin Boule, professor at the Museum of Natural History in France and director of the French Institute of Human Paleontology, analyzed the skeleton in detail, eventually publishing his findings in the scientific literature. Before his scientific publication, however, a weekly French newspaper (L’Illustration) published the drawing above, which was based on Boule’s work. The drawing was later published in the Illustrated London News. As you can see from the drawing, Neanderthal man was interpreted to be a sub-human creature that was probably one of the steps in the hypothetical evolutionary process that led from an ape-like creature to modern humans.

As time went on, more discoveries were made that indicated this view was far from correct. Artifacts were found indicating that Neanderthal man buried his dead, used fire, made art, etc. This somewhat elevated Neanderthals from sub-human to almost-human. When DNA analysis strongly suggested that Neanderthals and what some call “modern humans” interbred, it became increasingly clear that from a biological point of view, Neanderthals were, in fact, fully human. Nevertheless, most evolutionists still consider Neanderthals to have lower intelligence than modern humans.

Throughout this entire time, creationists have seen Neanderthals as human in every way, including their intelligence. As early as 1925, creationist Harry Rimmer wrote a pamphlet entitled “Monkeyshines: Facts, Fallacies, and Fables Concerning Evolution.” In it, he says that drawings like the one given above are incorrect. He goes on to state:

At any rate, these reconstructions of the Neanderthal man do not show him the way his skeleton really was. He also was a true man.

This has been a common theme throughout the young-earth creationist literature. Neanderthal man was truly human in every sense of the word. A recent paper confirms this long-standing creationist prediction, while at the same time falsifying the evolution-inspired idea that Neanderthal man was of low intelligence. The paper analyzed a cord that was found on a stone tool which was made by Neanderthals. While the cord was not part of the stone tool, it was stuck to the tool and was deposited either before or with it. The authors show that the cord was made of three strands twisted around each other, which indicates sophisticated intelligence. As they say, it

“…is the oldest direct evidence of fibre technology to date. Its production demonstrates a detailed ecological understanding of trees and how to transform them into entirely different functional substances. Fibre technology would have been an important part of everyday life and would have influenced seasonal scheduling and mobility. Furthermore, the production of cordage implies a cognitive understanding of numeracy and context sensitive operational memory. Given the ongoing revelations of Neanderthal art and technology, it is difficult to see how we can regard Neanderthals as anything other than the cognitive equals of modern humans.

5 Responses to Another Confirmed Creationist Prediction