Climate change alarmists (aka global warming alarmists) are constantly making dire predictions, and over time, those predictions end up being falsified*. This doesn’t stop them from making even more dire predictions, however, since the media rarely point out how wrong they have been in the past. Usually, those dire predictions are found in the popular media, but since climate science has been infected with craziness, such nonsense even makes it into the the scientific literature.

Consider, for example, this 2012 study, which was published in the prestigious Proceedings of the National Academy of Sciences of the United States. The authors claim that their study shows coral in the Great Barrier Reef (GBR) had been declining for the past 27 years, and then they state:

Without significant changes to the rates of disturbance and coral growth, coral cover in the central and southern regions of the GBR is likely to decline to 5–10% by 2022. The future of the GBR therefore depends on decisive action. Although world governments continue to debate the need to cap greenhouse gas emissions, reducing the local and regional pressures is one way to strengthen the natural resilience of ecosystems.

So governments must act decisively to cut greenhouse gas emissions, or the GBR is going to dwindle to a fraction of its original glory. Well no decisive action was taken, and it’s now 2022, so we might as well see how close to accurate the prediction is.

Probably the most reliable source on the state of the GBR is the Australian Institute of Marine Science. Every year, it does an extensive survey of the GBR and publishes its results. The study splits the GBR into three specific regions (Northern, Central, and Southern). I showed the results from last year’s survey about a year ago. Here are the results of this year’s survey: 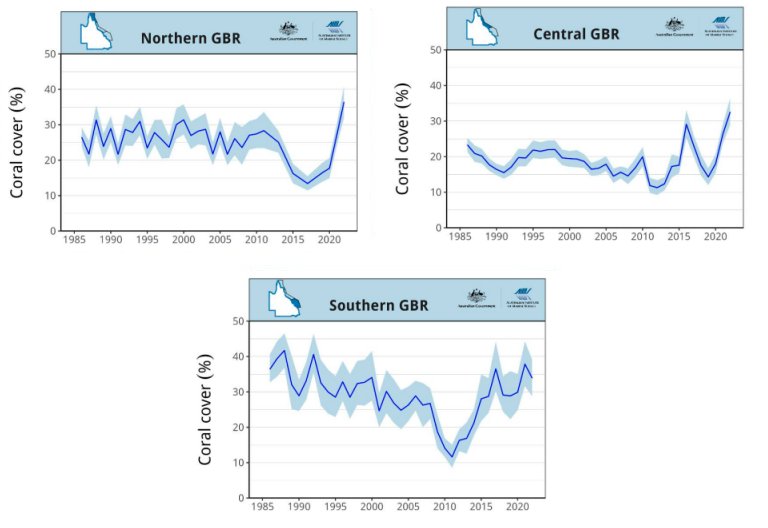 Obviously, then, we can add this to the ever-growing list of falsified predictions made by those who care more about scaremongering than good science.