I am on my way home from an incredible tour of New Zealand, South Korea, and Australia. I had great experiences in each country, and they will lead to several more blog posts. Even though I was most recently in Australia, I am not done reporting on my experiences in South Korea. I first want to finish my report on that country, and then I will discuss my wonderful time in Australia.

After speaking at the DCTY homeschooling convention in Seoul (which was fantastic) I spoke at KAIST church. To fully appreciate my experience there, you have to understand that KAIST is the main science and technology university in South Korea. Well before I knew I was going to travel to South Korea, I had heard of KAIST. It has an international reputation for producing not only good science, but also excellent graduates. It is not surprising, then, that KAIST is sometimes referred to as the MIT of South Korea.

If you can’t read Korean, the pictures should tell you all you need to know. This is a young-earth creationist display that discusses rapid fossilization as well as the stasis that is seen in the fossil record. It turns out that the room was filled with such displays. Here is another: 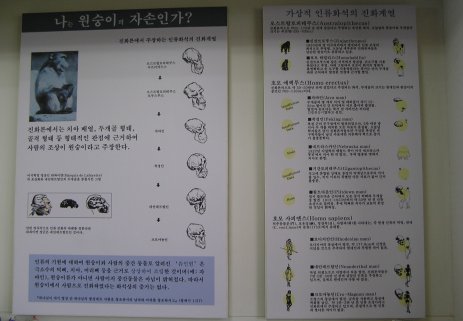 Now don’t get the wrong idea. These displays were not put up by the university. They are in the student center, so the displays were put up by a student group. However, they are on campus at a secular university in South Korea. What this means is that enough KAIST university students are interested in creation science to support what is essentially a small museum about creation science right there on campus.

Not surprisingly, I got a lot of excellent questions from the KAIST students (both the undergraduates and the graduate students). One student asked about viruses. Were they created, or did they come about after the Fall? I told him about the emerging creationist view that viruses might have been created by God in order to serve as beneficial intermediaries between different species or between organisms and the environment. To support this, I mentioned an example of virus-mediated mutualism that shows how a virus can be a beneficial intermediate between two organisms. So viruses could have initially been beneficial to creation, but the Fall could have caused many of them to develop a pathogenic nature. I also pointed out that there is an evolutionary mystery related to RNA viruses, but at least one creationist model explains that mystery quite well.

Another student asked about evolutionary relationships as determined by different kinds of analyses. In one of his courses, he was told that scientists have compared evolutionary trees that were determined by analyzing the appearance of animal bones to those that were determined by analyzing the biological molecules found in animals. According to his professor, these analyses yield essentially the same results, providing strong evidence not only for evolution in general, but also for those specific evolutionary relationships. He said he tried to get his professor to give him some references so he could check out the claim, but the professor was unwilling to give him any. Of course, that isn’t surprising, because the scientific literature says just the opposite.

For example, Trisha Gura wrote a review article on this topic in the journal Nature. It was entitled, “Bones, molecules…or both?” Here is how the journal sums up the contents of that article:1

Evolutionary trees constructed by studying biological molecules often don’t resemble those drawn up from morphology. Can the two ever be reconciled, asks Trisha Gura.

So in the end, the idea that there is a general agreement between the various data sets when it comes to evolutionary relationships is nothing more than a falsehood. It is a common falsehood promoted by a lot of evolutionists, but it is still a falsehood. The disagreement among data sets points strongly to the fact that evolutionary relationships do not exist in reality. Instead, they exist only in the minds of evolutionists.