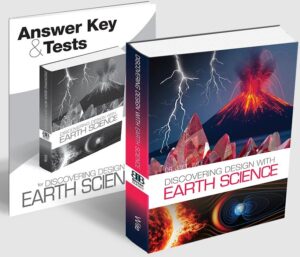 Because of difficulties surrounding supply chains, employment, etc., it took a lot longer than expected, but Discovering Design with Earth Science is finally here! I have to take a moment to praise my publisher, who truly went above and beyond what most publishers would do in this situation. The facility that usually does the printing told my publisher that they couldn’t get the books done in time to get them out to those who are starting school in August. As a result, my publisher ended up contacting several printers and found one that would do a “short run” (printing a smaller number of books) to meet the needs of those who were counting on the book being available in August. Short runs cost more money per book, so my publisher is sacrificing income in order to make the books available to those who need them. Not many publishers would do that, and I want to commend Berean Builders for its commitment to customer service!

The course covers earth science at the late junior high/early high school level. In practical terms, it could be used for either 8th or 9th grade, depending on the student. It covers the basic structure of the earth, geology, fossils, physical oceanography, weather, and space. Like all my courses, it has laboratory exercises built right into the book. Some of the exercises use household items, but there are several that require a kit which has a digital mass scale, some chemistry supplies, and specific samples of sediments, rocks, minerals, and fossils.

As I have tried to do in the past, I strive to present both sides when it comes to the age of the earth. Throughout the first nine chapters of the book, students will learn the data that lead many scientists to conclude that the earth is billions of years old, but they will also learn the data that lead some scientists to believe the earth is thousands of years old. I do not tell the students what I believe, but they can probably figure it out if they want to. Nevertheless, here is how I end the ninth chapter:

Regardless of how convincing teachers or textbooks are, do not form an opinion until you have looked at all sides of an issue. Otherwise, you might end up being fooled.”

3 thoughts on “Discovering Design with Earth Science is Finally Available!”