The earth has been magnificently designed for life. Amongst its amazing contrivances for nurturing and protecting living organisms, its magnetic field shields its surface from most of the high-energy radiation to which it is exposed. If it weren’t for this protective shield, life as we know it could not exist on earth. So what happens when people venture beyond that protective shield? A recent paper in the journal Scientific Reports attempts to answer that question by studying astronauts. While it suffers from the unavoidable weakness of using a very small group of individuals, the results presented in the paper are very interesting.

The researchers who wrote the paper examined five women and 37 men who had spent some time in space. All five women and 30 of the men experienced low-earth orbit, while seven of the men were a part of the various Apollo missions that went to the moon. These astronauts were compared to three women and 32 men who have been trained as astronauts but have never gone into space. Both of those groups were also compared to the U.S. population of the same age range. Specifically, the researchers were looking for the mortality rates among the astronauts, as well as what caused their deaths.

What they found was that the astronauts who never went into space were less likely to die from cardiovascular disease and other common ailments (such as cancer) than the rest of the population in the same age range. This makes sense, since health is one of the factors used to choose astronauts, and their training keeps them healthy. However, they were more likely to die from accidents than the rest of the U.S. population. Once again, this makes sense, since being an astronaut is a dangerous line of work.

However, when the astronauts who never went into space were compared to the Apollo astronauts, there was one striking difference.

The percentage of Apollo astronauts who died of cardiovascular disease was five times greater than the corresponding percentage in the group of astronauts who never went into space! Surprisingly, there were no significant differences in the others causes of death. Thus, as far as these results indicate, traveling to the moon and back increases a person’s risk of death by cardiovascular disease, but not death by cancer or other diseases!

What about the astronauts who didn’t go all the way to the moon? Here is a graph from the paper, which shows the percentage of deaths due to cardiovascular disease among all the groups studied: 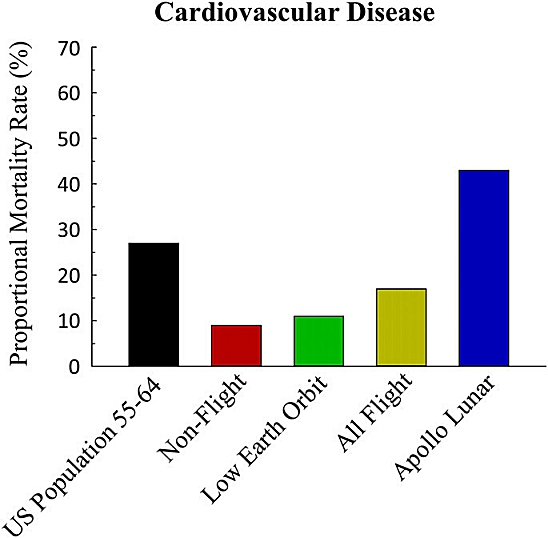 It’s very important to understand that there are statistical considerations you must make when viewing these results. Because the number of astronauts studied is low, some differences between them can crop up as a result of random chance. Thus, even though the percentage of low-earth orbit cardiovascular deaths is higher than the non-flight cardiovascular deaths, the difference is not statistically significant. That means we don’t know whether the difference you see in the graph is the result of random chance or is real. However, despite the small group size, the difference between the “Apollo lunar” group and the other astronauts is probably real, because statistical considerations indicate that it is significant.

Does this mean we know for sure that a trip to the moon increases your chance of dying from cardiovascular disease? No. However, this study does provide some evidence to suggest that. If this had been the end of the study, I probably wouldn’t have blogged about it, since the number of people studied is so small that even when you do the statistical tests, you can’t be confident that the difference seen in the study is real. However, the researchers did one more thing that adds weight to their results.

The researchers studied mice under three different conditions and compared them to a control group that were give no special conditions. They elevated the hindquarters of some mice for 14 days. This is a common technique used to simulate weightlessness for the hind legs. They irradiated another group of mice to simulate the radiation experienced by astronauts. They did both of those things to a third group of mice. Compared to the control group, they saw no difference in various cardiovascular indicators in the mice who were given only simulated weightlessness, but they did see elevated problems in the cardiovascular indicators of the mice that were irradiated as well as those who experienced both simulated weightlessness and irradiation.

While there still needs to be further study on this issue, I do think the paper provides good evidence that space travel can elevate a person’s risk due to cardiovascular disease. Furthermore, it is probably mostly due to the increase radiation exposure.

Of course, that would never cause me to turn down an opportunity to travel to the moon or another planet!

9 thoughts on “Radiation Probably Did Harm the Apollo Astronauts”