Skip to content
Roughly every four years, the United States Department of Education produces a report of statistics related to homeschooling. Their 2016 report, which covers statistics from 2012, was recently released, and it contains some interesting results that I think are worth discussing. Before I do that, however, it is important to note the limitations of this report.

Since each state has its own laws regarding home education, it is very difficult for the federal government to track homeschooling families. As a result, the estimates regarding the number of homeschooled students is probably low and the sample that was studied is probably not totally representative of the homeschooling population. Also, the detailed statistics are based on a survey called the “Parent and Family Involvement in Education Survey.” Of the more than 17,000 students covered in that survey, only 397 were homeschooled. Thus, the statistics are based on a relatively small sample of students. Nevertheless, some of the results are worth noting.

First, the report tries to adjust its results to take into account the fact that it can’t track all homeschooling families. Based on the data and the subsequent adjustments, the report estimates that there were 1,773,000 students being homeschooled in 2012. This did not include students who were being temporarily homeschooled (because of a long-term illness, for example). This translates to roughly 3.4% of the population, which represents a doubling of the percentage of homeschooled students in 1999 and an 18% increase from the time of the previous report (2007). Needless to say, then, homeschooling is becoming more common.

Before I give you the next interesting statistic, I want you to think about the answer to the following question:

Are homeschooling parents generally more or less educated than the rest of the population?

I now want to present the most interesting of all the statistics, but before I do, I want you to once again answer the following question:

What is the most important reason homeschooling parents choose to homeschool their children? 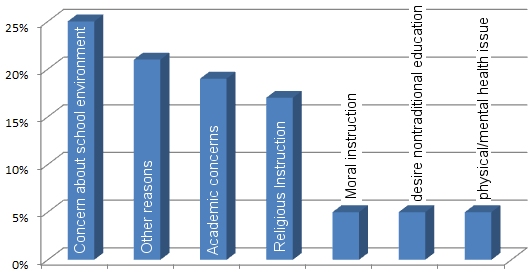 As you can see, religious instruction comes in fourth, behind concerns about the school environment, other reasons, and concerns that schools don’t provide adequate academic instruction. That is definitely not what I (or most of my friends) would have predicted! As a side note, you might be interested in what the parents meant by “other reasons.” According to the report, most of those reasons were specific to the particular family, such as travel, finances, and distance to a school.

Homeschooling has definitely changed over the years. As it has become a more common choice among parents, the reasons for making that choice and the type of parents who homeschool have changed. As time goes on, I expect homeschooling to continue to grow as a percentage of the population. As a result, I expect the homeschooling community to become even more diverse in their views and their reasons for homeschooling.

12 thoughts on “The Latest Numbers on Homeschooling From The U.S. Department of Education”