In my previous post, I shared a very creative lab report that I received from a physics student in one of my online physics courses. In this one, I want to share something from another very creative student. In order for you to appreciate it, however, a bit of background is necessary.

In my online courses, students take tests online while being supervised by their parents. The parent has a passcode for each test, and when the student is ready to take the test, the parent inputs the passcode into a website. This opens up the test for the student to take. Some of the test questions are multiple-choice (I call them “multiple-guess”), some are true/false, and some are short answer. That, however, is not enough to fully assess a student’s knowledge when it comes to science, so I also have a few “essay” questions on the tests. In physics and chemistry, they are usually long, involved problems that the student must work out.

In order to properly assess the student’s work, I must see all the steps that the student takes to come up with the answer. If the student were taking the test on paper, that would be fairly easy. The student could just write out the equations being used, show how the variables were plugged it, and go through whatever algebra is necessary. However, on a website, that can be tricky. The program we use has an editor that allows the student to write equations, but it is bulky and cumbersome. Student can do their work on paper and then upload an image of the paper, but that is also bulky and cumbersome. As I result, I simply tell students to explain the steps they took to get to the answer, and I allow them to use any method they think bests accomplishes this goal. Some use the equation editor, some use paper and upload an image, some give equations using just text, and some give me a narrative of what they did.

Eden Cook is an example of the latter. She gives me a narrative of her work, usually in the form of an amusing story. There are typically characters in her stories, and they each have their own personality, which adds to the humor. One of those characters is “Newton.” Well, in one question where she had to determine the electric field produced by two stationary charges (represented by one one black dot and one blue dot), she decided to forgo the story and write a poem. I.T. W.A.S. E.P.I.C. 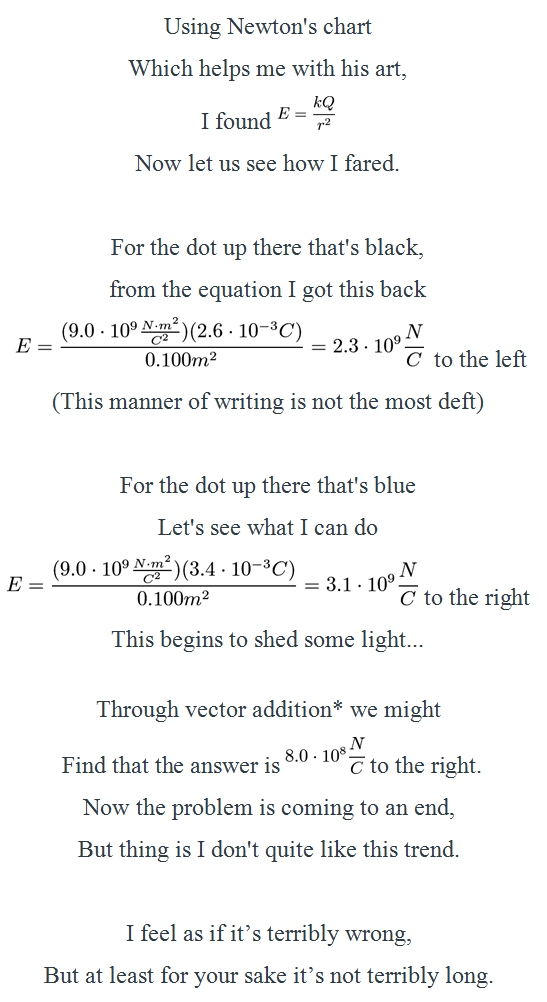 (The star is a footnote where she shows the vector addition, and her answer was correct.)