Al Gore told a German audience in December of 2008 that the polar ice cap will disappear in FIVE YEARS.1 A Washington Post story from April of this year says

The data on this winter’s ice buildup came on the day that international ministers gathered in Washington to address issues facing Earth’s polar regions, which have been disproportionately affected by global warming. 2

It goes on to quote Norway’s foreign minister that “The ice is melting…We should all be worried.”

Well, Al Gore, the Washington Post, and Norway’s foreign minister should all be breathing a sigh of relief. As all climatologists agree, the poles should be most affected by global warming, and guess what’s happening at the South Pole? The ice just keeps growing!

Marco Tedesco and Andrew Monaghan just published the latest results on the amount of ice melt in Antarctica, and the results are quite stunning: 3 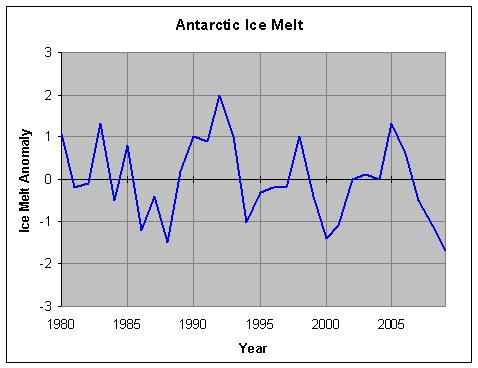