Of course, a lot of universities recognize this fact. IUPUI in Indianapolis, Indiana makes it very clear on their website. They say:

Over 150 students have enrolled at IUPUI with home school backgrounds and as a group these students have academically excelled and out-performed the general student population.

Stanford University (like most serious universities) actively recruits homeschoolers, and they accept a higher percentage of their homeschooled applicants than the rest of their applicant pool. Jonathan Reider, an admissions officer at Stanford university explains why:

The distinguishing factor is intellectual vitality. [Homeschooled] kids have it, and everything they do is responding to it.”

Boston University agrees. They followed their homeschool graduates for several years and found their average GPA was 3.3 out of 4.1 That’s a sold “B.”

It’s not surprising, then, that when other universities examine their homeschooled population, they find real success. 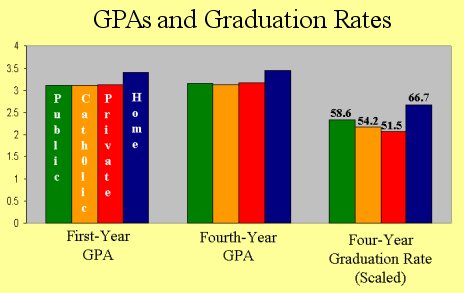 Notice that whether we look at their first-year GPA, their fourth-year GPA, or their graduation rate, homeschool graduates (represented by the blue bars) are simply a cut above the other students. That’s what I saw when I was on the faculty at Ball State University, and that’s what the studies continue to show.

Now please note that while this study is informative, it has one major flaw. The sample of homeschooled students was small (just over 70). Thus, you probably can’t draw any firm conclusions from just this study. However, when you combine it with the other information I have discussed in this post, a pattern clearly emerges. That pattern is one of homeschooled students being very successful at college.