In 1988, the U.S. Senate’s Committee on Energy and Natural Resources held a hearing on the greenhouse effect and global climate change (transcript here, digitized version here). In that hearing, Dr. Michael Oppenheimer (atmospheric physicist and senior scientist with the Environmental Defense Fund) testified about the impending doom that were are all facing if we don’t immediately curtail our greenhouse gas emissions. He said, in part:

Certain gases which occur in the atmosphere in small amounts are growing rapidly in concentration due to human activities related to industry and agriculture. Primary among these is carbon dioxide, a product of coal, oil, and natural gas combustion. These “greenhouse gases” trap heat radiating from the surface of the earth which would normally escape into space, resulting in a warming of the surface. This increase in global temperature causes a concomitant rise in global sea level as ocean water expands and land ice melts. As long as the amounts of greenhouse gases increase in the atmosphere, this process will continue unabated. There will be no winners in this situation, only a globe full of losers. Today’s beneficiaries of change will be tomorrow’s victims as the changing climate rolls past them like a wave that first sweeps you up, then drops you in the trough behind it. The very concept of conservation does not exist in a world which may change so fast that ecosystems, which are slow to adjust, will wither and die. The technical findings of the Villach-Bellagio workshops include: Global mean temperature will likely rise at about 0.6 degrees Fahrenheit per decade and sea level at about 2.5 inches per decade over the next century. These rates are 3 to 6 times recent historical rates. (emphasis mine)

Well, this prediction was made 30 years ago. That’s about one-third of the timescale that he is discussing (“over the next century”). Nevertheless, we don’t see any hint that his predictions are coming true. Examine the image at the top of the post. It shows the latest satellite-measured global temperatures, which have been recorded since 1979. Is there any indication that rate at which global temperature is rising has increased since 1988? No. In fact, you could easily argue that the rate of global temperature increase was higher from 1988 to 1998 that it has been since 1998. There even seems to have been a “pause” in temperature increase from 2002 to 2015.

What of his prediction that the rate of sea level rise would increase? Well satellites have been measuring that for a while, too. Here is what they have seen since 1993:

Notice that the rate of sea level rise is 2.8 millimeters per year (1.1 inches per decade), less than half of what Dr. Oppenheimer predicted. More importantly, notice that the rate of increase has been pretty constant, despite the fact that the carbon dioxide concentration in the atmosphere rose significantly during that same time period.

Now, of course, these are relatively short time periods, so it’s always possible that there are some surprises ahead. However, given the fact that nearly one-third of the time that Dr. Oppenheimer was discussing has already passed, we can say that there are certainly no indications that his predictions have any chance of coming true.

Why am I sharing this with my readers? For two reasons. First, a scientific theory is judged by the success of its predictions. Right now, the theory that is guiding most climate alarmists has failed in its predictions (see here, here, and here). That should tell you something about its soundness. Second, the climate alarmists will continue to make dire predictions, regardless of what the data say. It is important for people to learn how wrong their previous predictions have been. 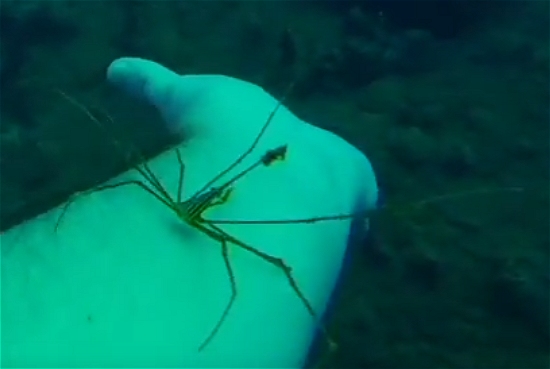 My blog has been unusually silent for a while, because I went on vacation. I am back, and I plan to start blogging again, but for now, I wanted to share with you some highlights from a dive that I got to do while I was in the Dominican Republic. I hope you enjoy them!

Sea levels have been rising since the early 1800s, and while satellites have only been measuring them since 1992, satellite measurements indicate that they have been rising at a fairly constant rate of 2.8 millimeters per year. This is concerning to many people, especially the ones who live in countries like the Republic of Maldives, which is, on average, only 1.5 meters above sea level. In fact, the country is so concerned about the rising seas that in 2009, the nation’s cabinet held a meeting underwater, where they signed a document calling on all countries to reduce their carbon dioxide emissions. After all, it is thought that rising carbon dioxide levels in the atmosphere warm the planet, which in turn causes sea levels to rise. If sea levels rise too much, the Republic of Maldives will be lost.

Now, of course, that kind of reasoning makes sense, but anyone who studies science should understand that things which make sense are not necessarily true. A lot of Aristotle’s notions (such as the idea that objects prefer to stay at rest) made sense, but science has demonstrated them to be false. In the same way, a lot of our modern theories (like quantum mechanics and relativity) make little sense, but experiments strongly support their conclusions (see here and here, for example).

Rather than giving into the hysteria, then, it is best to see what the data indicate. Interestingly enough, the data say that while the idea that rising sea levels will destroy countries like the Republic of Maldives makes sense, it is almost certainly not true. I first wrote about this three years ago, when a group of researchers decided to study some of the islands around the Funafuti Atoll, which holds the island nation of Tuvalu. They found that contrary to the hysteria, the majority of the islands they studied have grown since 1897, leading to a net increase in the amount of land available. Well, the same research group has completed a more extensive study, which confirms their previous conclusion.

END_OF_DOCUMENT_TOKEN_TO_BE_REPLACED 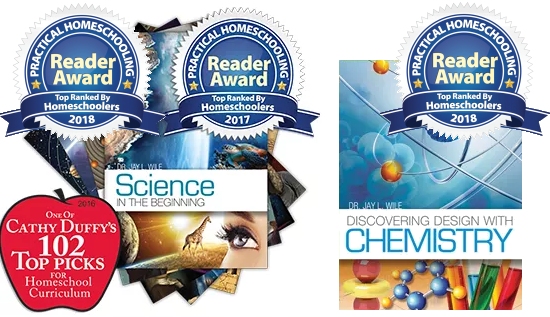 I wanted to share this with my readers: Practical Homeschooling has announced that my elementary series was awarded first place in the Elementary Science category of their 2018 Reader AwardsTM. This is the second year in a row that my elementary courses were given this honor. Here is what one homeschooling parent had to say about the series:

We studied Dr. Wile’s first book, ‘Science in the Beginning’, and we loved it. But then I got a little apprehensive about the next ones, because like you say, they were written with a different approach. I tried a different curriculum, with a more traditional sequence, and we were bored! One semester was enough. Since then we have done all four books, and we started with the 5th one this school year. What we love the most is that the lessons teach ONE concept, and the experiment, like you mentioned, cements that concept. I will not look into more Science curricula ever.

In addition, my new high school chemistry course was given the same honor! The course has been available for less than three years, and I am thrilled that it has already become popular enough to win over the readers of Practical Homeschooling. Of course, no honor can be as thrilling as receiving these kinds of emails from students:

Hi! I just wanted to let you know how much I have enjoyed Discovering Design With Chemistry. I am a tenth-grade homeschooled student, and I really learned so much through this book. After taking this course, I know I will definitely take Advanced Chemistry in my senior year, and I will seriously consider studying chemistry in college as well. I found chemistry to be enjoyable and exciting through your work! Thank you!

If you are wondering how my new chemistry course differs from Apologia’s current chemistry course, you might want to read this comparison from a homeschooled student and her mother.

I want to thank Practical Homeschooling and its readers for these honors. I am happy to know that my courses are making home science education easier and more enjoyable!

Click here to learn more about my science courses.