Once again, let me preface this by saying that I am not anti-mask. I wear a mask whenever I am in public, and I did so even before my state made it mandatory. In addition, I am not telling people to stop wearing masks. As I said in my first post, any mask not made specifically for viruses will be pretty much worthless in protecting the wearer. However, a mask does reduce the number of water droplets that the wearer spews into the air, and since those droplets can contain viruses, it probably does protect the people around the wearer, albeit to a small extent. Thus, you should wear a mask. At the same time, however, you need to have a realistic idea of what kind of protection it provides. So far, the data say it offers only a little protection.

END_OF_DOCUMENT_TOKEN_TO_BE_REPLACED

In the midst of this pandemic, most governments are requiring people to wear mask in public. I will start this by saying that I began wearing a mask early on in the pandemic, long before any mandates were made. I didn’t wear one because I thought it would be effective. Even a basic understanding of science tells us that standard masks provide little protection against the spread of a virus. Protecting yourself against a virus using a mask that is not made specifically for viruses is roughly equivalent to protecting your yard against mosquitoes by installing a chain-link fence.

However, a mask does reduce how many water droplets you spew into the air, and since those droplets can carry viruses, there is probably some small protective effect for those with whom you come into contact. I wore a mask early on simply to put others at ease. Now I wear one because I think people must follow a society’s rules (unless they are immoral) in order to be a functional member of that society. If the mandates were lifted, however, I would still wear a mask in public until the pandemic dies out, simply because some people think it protects them, and I want to put such people at ease.

Having said that, there has been one study that concluded mask mandates reduced the rise of COVID-19 infections by a tiny amount. However, the study couldn’t conclude that the masks were the cause of the tiny decline. Most likely, when a mask mandate is instituted, people become naturally more cautious, limiting their social interactions, being more aware of social distancing, etc. Thus, it’s possible that the masks had nothing to do with the small reduction in COVID-19 cases.

My publisher sent me a recent study that tries to address the question a bit more effectively than the study linked above. It didn’t test masks directly, because it would be impractical to follow people around making sure they were wearing their masks. However, the study gave 3,030 people a set of recommendations for protecting themselves against COVID-19. They included things like social distancing, etc., as well as the recommendation to wear a mask, 50 surgical masks, and instructions on how to use them. The study also gave 2,994 people the same set of recommenstions, minus the mask recommendation, the masks, and their instructions. After 1 month, they tested people for COVID-19 antiboides. This was all during a time when their communites did not issue any mask recommendations or mandates.

The results showed that slighly fewer people in the mask group contracted COVID-19 than those in the no-mask group. However, because the number of people who contracted COVID-19 during the study was small, the difference between the groups could have been the result of random chance. In the end, the authors use basic statistics to conclude that the mask group was somewhere between 46% less likely to get the disease and 23% more likely to get the disease. As they say:

The recommendation to wear surgical masks to supplement other public health measures did not reduce the SARS-CoV-2 infection rate among wearers by more than 50% in a community with modest infection rates, some degree of social distancing, and uncommon general mask use. The data were compatible with lesser degrees of self-protection.

Now, of course, we have no idea what percentage of the people in the mask group actually followed the recommendation, but the study made it pretty easy to do so. Combined with the study I linked at the beginning of the post, I think we can conclusively say that if the typically-used masks provide protection against COVID-19, it is small. Thus, when “experts” say nonsense like this:

If we could get everybody to wear a mask right now, I really think in the next four, six, eight weeks, we could bring this epidemic under control.

We know they are not using science to inform their opinion.

There has been a lot of talk about Pfizer’s COVID-19 vaccine, and a reader asked me to comment on it. The company claims it is more than 90% effective at preventing the disease, which is better than what most health-care experts were expecting. If true, that news is exciting enough. To add to the excitement, it is a new kind of vaccine that has great potential, if it works the way it is supposed to. There is another company trying to produce a similar vaccine, but it looks like Pfizer is in the lead, so for the purpose of this article, I will focus on its version.

Let me start by saying that I have no connection to Pfizer or any other pharmaceutical company. I am a science educator who writes about science issues like this one. I am also not a medical doctor or medical researcher. I am simply a nuclear chemist who has broadened my knowledge base by writing (or co-writing) a series of textbooks used by home educators and teachers in Christian schools. Thus, I am no expert on these matters. However, I get most of my information by reading the scientific literature, which allows me to avoid a lot of the misinformation found in the standard media outlets and (even worse) social media.

Before I talk about Pfizer’s vaccine in particular, I want to explain how this kind of vaccine works. To understand that, remember that a traditional vaccine uses a weakened/inactivated form of the pathogen whose infection it wants to prevent (or a chemical mimic of that pathogen). This causes your body to react as if it is being infected by the real thing. As a result, it mounts a defense that is specific to that pathogen and remembers how to fight it. That way, if you get infected by the real thing, it can mount a swift immune response. This process takes advantage of your acquired immune system. However, you also have an innate immune system, and the active ingredient of the vaccine does not stimulate it. As a result, traditional vaccines have additives, called adjuvants, which are designed to stimulate your innate immune system. That way, everything in your immune system works the way it is designed to work.

END_OF_DOCUMENT_TOKEN_TO_BE_REPLACED 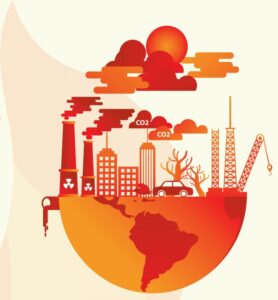 Carbon dioxide absorbs the infrared radiation that the earth emits, trapping it before it leaves the planet. This warms up the atmosphere, making the earth a haven for life. Obviously, then, the more carbon dioxide we put into the atmosphere, the warmer it will get, right? Not necessarily! As I tell my high school and university students over and over again: Science isn’t simple! As a result, conclusions that seem “obvious” to most people (even most scientists) are often absurdly wrong. A recently-produced study that has not yet been published in the peer-reviewed literature makes this case about carbon dioxide and global warming, aka “climate change.”

Now all of this is well known, and most global warming models attempt to include these effects in their calculations. The problem is that they treat them in a crude way. This is understandable, since a model that is trying to simulate the entire atmosphere has to consider a lot of things. As a result, most of them are treated crudely so that the model doesn’t become overwhelmingly convoluted. That’s where this unpublished study comes in. The authors test the effect of treating the science related to saturation crudely, and they say it renders the models pretty much useless when it comes to understanding how carbon dioxide affects the present atmosphere.

How do we know that their analysis is correct? We don’t. When they compare their calculations of how much infrared radiation is being absorbed for each wavelength to what satellites have been measuring, they see virtually no difference. Thus, their calculations seem to reflect reality very well. However, I am not very knowledgeable about the details, so there might be fatal flaws in their analysis that I am not seeing. Once again, science isn’t simple. I really hope this gets published in the peer-reviewed literature so that experts can weigh in on the conclusions. Unfortunately, I am not confident this paper will get that far. If its conclusions are correct, then there is absolutely no basis for the fear-mongering that surrounds carbon dioxide emissions. There are so many scientists whose careers have been made based on that fear-mongering, they may simply keep the paper from being published.

Fortunately, science is self-correcting. One way or another, we will figure out the details related to this issue. It might take longer than it should, and it might be after terrible decisions have been made based on faulty climate science, but at some point in the future, we will find out whether or not these authors are correct. I hope it is sooner rather than later!