Back in the late 1980s and the early 1990s, it was fashionable among certain archaeologists to claim that Biblical characters such as King David never existed. However, archaeological finds like the Tel Dan Stele forced most of these archaeologists to admit that King David was, indeed, an actual historical figure.

But many of them still wanted to doubt the accuracy of the Biblical text. As a result, they grudgingly admitted that David really existed, but they claimed that the Old Testament “glorified” him. He wasn’t the king of a mighty kingdom, as depicted in the Bible. Instead, he was more of a tribal chieftain who commanded a rag-tag group of rural villagers. National Geographic, for example, describes how Dr. Israel Finkelstein, an archaeologist at Tel Aviv University, sees it:1

During David’s time, as Finkelstein casts it, Jerusalem was little more than a “hill-country village,” David himself a raggedy upstart akin to Pancho Villa, and his legion of followers more like “500 people with sticks in their hands shouting and cursing and spitting—not the stuff of great armies of chariots described in the text.”

While this might be the fashionable view among certain archaeologists, the actual archaeological evidence speaks strongly against it. As I discussed more than a year ago, the excavations at a large city called Khirbat Qeiyafa have demonstrated that in the late 11th-century BC (David reigned in the early 10th century BC), Judah was already a thriving kingdom. Just recently, more archaeological evidence has surfaced to back up this view of ancient Judah.

END_OF_DOCUMENT_TOKEN_TO_BE_REPLACED 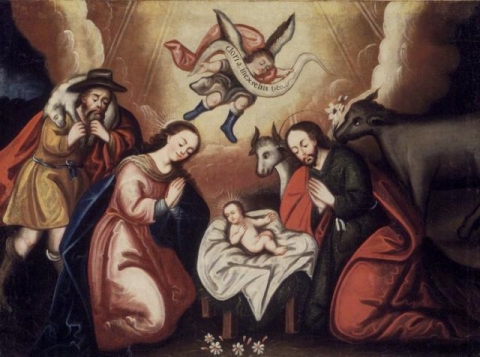 Since this is my last post before Christmas, I thought I would include another Christmas Drama that I wrote. All of the dramas I write are non-traditional, but this is non-traditional in a couple of ways. First, it tells the Christmas story, but not in the standard way. If you read the script, you will see that it starts with a stage that has a stable filled with hay. This gives the illusion that the congregation will be seeing a standard depiction of the nativity. It even begins with an innkeeper sweeping the floor. A knock is heard, and the innkeeper says that there is no room. The person outside persists, saying that his companion needs help. When the innkeeper answers the door, however, two men walk in.

The audience learns that the men are Saul of Tarsus and his traveling companion, Shemaya. Saul has been struck blind and is making his way slowly to Damascus. However, they need to get out of the terrible weather. The innkeeper eventually agrees to let them stay in his stable, and that’s where they go. When the innkeeper brings them blankets to help make them more comfortable, Saul speaks for the first time. In the discussion that follows, the innkeeper learns about Christ’s crucifixion, resurrection, and birth, in that order. Along the way, the audience learns that this is the same innkeeper who (when he owned an inn in Bethlehem more than thirty years ago) sent Mary and Joseph to his stable. He has been suffering from guilt about that, and he ends up finding forgiveness and joy as a result of Saul’s visit.

The play is also non-traditional because it uses some multimedia. The story of Christ is told through “flashbacks.” Sometimes, the flashbacks contain singers who are supposed to represent people from the past. A teenage young lady, for example, sings “Be Born in Me” as Mary. Later, she and a teenage young man (playing Joseph) care for a baby in a manger. Some of the other flashbacks, however, use singers in modern dress and a slideshow that depicts the event being presented. For example, to tell the story of the crucifixion, two singers in modern dress sing “The Power of the Cross,” while a slideshow presents several pieces of art that depict the crucifixion. Two of the flashbacks don’t even use live people. They are just YouTube videos. The combination of the way the story is told and the incorporation of multimedia make the drama very non-traditional, indeed.

It’s kind of silly, but this is one of my favorite endings. Even if you don’t read the entire script, you might want to skip to the last page and read it. If you do, remember who Saul becomes…

Feel free to use the script in any way you think would edify the body of Christ, but if you use it, I would appreciate a credit.

Full script of The Innkeeper: More than 30 Years Later

The National Geographic headline says it all:

Biggest Walrus Gathering Recorded as Sea Ice Shrinks
More than 35,000 of the marine mammals have congregated in Alaska

Unfortunately, the headline isn’t true. It isn’t the biggest walrus gathering, and it’s not clear such gatherings have any relationship whatsoever to the amount of sea ice that exists in the Arctic. Where did National Geographic get their false information? From the United States Geological Survey (USGS).

The National Geographic article goes on to say:

Scientists have seen large haul-outs on the Russian side of the Bering Strait for quite some time, says Anthony Fischbach, a wildlife biologist at the USGS in Anchorage. But since the first recordings of walrus gatherings in Alaska in the 1870s, groups of this size weren’t observed until 2007, he said.

Of course, that’s also not true. Either the scientists at the USGS didn’t bother to check the literature on what they have been studying, or they willfully ignored the recorded observations of the past. This is not the largest haul-out on record for walruses, and haul-outs of this size have been observed several times in the past.

END_OF_DOCUMENT_TOKEN_TO_BE_REPLACED

Stem cells are a hot topic in biology. Scientists call them “undifferentiated,” because they have not yet specialized to become a specific kind of cell. This means that a stem cell can develop into several different kinds of cells, depending on what the body needs. For example, everyone has stem cells in their bone marrow. Some of those cells (called hemopoietic stem cells) can develop into various kinds of blood cells, while others (called stromal stem cells) can develop into fat cells, bone cells, or cartilage cells. Physicians have used such stem cells to treat certain heart conditions1, and it is expected that as time goes on, more stem-cell-based treatments will be developed.

Of course, bone marrow isn’t the only place in which stem cells reside. In fact, stromal stem cells can also be found in tooth pulp, the soft tissue that is under the tooth’s dentin (see the illustration above). That’s where the blood vessels and nerves of the tooth are found. While scientists have known for a long time that these stem cells are there, how they get there has always been a mystery.

Nina Kaukua and her colleagues weren’t trying to solve that mystery. They were just studying certain kinds of cells in the teeth of mice. These cells, called “glial cells,” are support cells that help the nerve cells (called neurons) do their job. In their research, they were adding a fluorescent chemical to these cells and watching what happened to them over time. What they found was kind of shocking!

END_OF_DOCUMENT_TOKEN_TO_BE_REPLACED

Because I was once an atheist and became a Christian, I am fascinated by stories of other atheists-turned-Christians. I have written about several over the years, and I plan to continue to write about them as I find out about them. Well, I ran across another one a few days ago, and his story is different from the others. For one thing, it starts in France!

Guillaume Bignon was born near Paris. He says that his family was “nominally Roman Catholic,” but none of them seemed to take it very seriously. By the age of 13, he decided that he no longer wanted to go to church, and his parents had no problem with that. As a student, he studied math, physics, and engineering, eventually graduating from an engineering school and working as a computer scientist. He also played volleyball for a national league. Here is how he sums up his life at that point:

An important part of young male French atheist ideals also consisted in female conquests, at which I was starting to have enough success to satisfy the raunchy standards of the volleyball locker room. All in all, I was pretty happy with my life, and in a thoroughly secular culture, the chances of ever hearing (let alone believe) the Gospel were incredibly slim.

Obviously, God can conquer the odds, no matter how slim.

END_OF_DOCUMENT_TOKEN_TO_BE_REPLACED

I haven’t written much about the chemistry course I am teaching at Anderson University, but it has been going very well. In fact, it is almost over. I don’t know whether or not I will do it again. It is a lot of fun to be teaching in a live classroom, but it also takes a lot of time to do it right. Unfortunately, that means less time for writing. Whether or not I do it again, I am glad I that did it this time.

As a part of my duties at Anderson University, I was asked to give a lecture for the public that is part of a very interesting series that the School of Science and Engineering is hosting. They said the lecture could be about anything, so I decided to share with the audience the fun you can have with chemistry. In the end, this turned into a lecture about fire, because I am a bit of a pyromaniac. I personally think all chemists are pyromaniacs, at least to some extent.

I started the lecture with burning gases that were held in balloons. Along the way, I taught the audience the basics of combustion. You can see a video of that part of the lecture below. Unfortunately, the camera had a bit of trouble focusing, because we dimmed the lights so the fire could be seen better. In addition, the best part of the lecture (burning a mixture of hydrogen and oxygen) did not translate well on video. The result was a loud explosion that shook the hall, but the camera’s automatic volume adjust ended up making it sound pathetic, so I cut it from the video. Nevertheless, I think you will enjoy the video segment, and I hope you learn from it as well.

Her latest book, 102 Top Picks for Homeschool Curriculum, is a set of reviews of what she considers to be the best curriculum available to home educating parents. I was honored to find out that my new elementary science series has been included in that book. In her review, she writes:

I’m not aware of any other science curriculum similar to this. While it is a Christian curriculum, it avoids the apologetics flavor of some others that spend a lot of energy arguing for creationism and against evolution. Nevertheless, it helps students view science from Christian worldview. The use of hands-on activities to introduce lessons, the multi-age format, and the chronological approach in this series are also features likely to appeal to many families. This seems to me an excellent way to teach science, and an approach that should have exceptional appeal for classical educators.

Of course, there are many other reviews of my new series, and most of them are very positive (see here, here, here, here, here, and here, for example). There is one negative review as well. In addition, there is one review that is a bit mixed, and it’s the one that caused me to write this post.